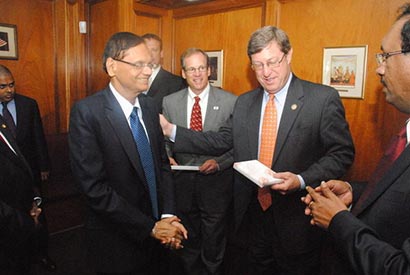 Sri Lanka’s Minister of External Affairs, Prof. G.L. Peiris, took part in a series of Capitol Hill meetings Wednesday on his second day of the four-day official visit to Washington, discussing with members of the House of Representatives Sri Lanka’s progress in post-conflict reconciliation and development, as well as reform measures that are designed to ensure a lasting peace.

Minister Peiris explained that the Sri Lankan government has developed a mechanism for implementation of recommendations accepted by the government, which will be directed out of the office of Sri Lanka’s presidential secretariat.

During the talks, Minister Peiris also noted that Sri Lankan President Mahinda Rajapaksa and Opposition Leader Ranil Wickramasinghe met on Monday to discuss matters related to multi-party participation in a Parliamentary Select Committee. The committee will consider constitutional amendments, Minister Peiris said, and it was important to the government that minority parties in Parliament take part in that process which should be all inclusive.
Both Van Hollen and Aderholt are co-chairs of the Sri Lanka caucus in the House of Representatives. Van Hollen’s father once served as U.S. ambassador to Sri Lanka.

Committee members commended Sri Lanka on its reconciliation and development progress since the May 19, 2009 conclusion of the conflict against the terrorist group Liberation Tigers of Tamil Eelam (LTTE). They also expressed enthusiasm for continued cooperation between the United States and Sri Lanka, and inquired about Sri Lanka’s plans to implement the LLRC’s recommendations.

Rep. Royce stated that he was specifically concerned about post-conflict international money laundering as “vexing and problematic for future.” Solving that problem, he said, was “important for long term stability.”

Prof. Peiris catalogued the progress made in Sri Lanka since the conflict, including the resettlement of displaced persons in the North, the investment in infrastructure there, the revitalization of the agricultural and fisheries industries in former conflict zones and the release of more than 11,600 former LTTE militants following a program of job and education training.

He noted that there are government controls to police money laundering, and that the government of President Rajapaksa places a high priority on the reconciliation process. He also discussed the strength of Sri Lanka’s relationship with the U.S. with regard to transnational security, the integrity of sea lanes and international navigation.

Land ownership and possession issues, he said, remain a complex challenge. The LTTE conducted a broad campaign of ethnic cleansing in Northern and Eastern Sri Lanka over many years, displacing land owners and giving that land to supporters. Now, Prof. Peiris said, with the return of normalcy, there is a need for a coherent structure to address the issues connected with land.

On Wednesday afternoon Minister Peiris took part in a round-table discussion on Sri Lanka and South Asia that was co-hosted by two premiere Washington think tanks, the American Enterprise Institute and the Heritage Foundation.