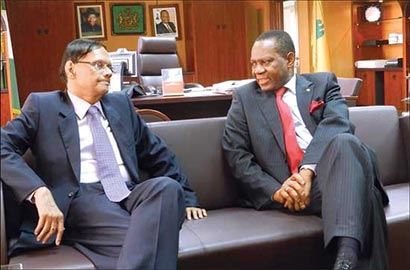 “Countries emerging from painful conflicts and renewing their commitment to economic and social development after the eradication of terrorism, deserve understanding and sympathetic support from the international community, not judgmental attitudes buttressed by pressure which erodes the dignity and self-respect of developing nations, External Affairs Minister Prof G L Peiris said in the Nigerian capital, Abuja on Wednesday.

He made these comments at his meeting with Nigeria’s Minister of Foreign Affairs Olugbenga Ayodeji Ashiru.

He explained to his counterpart in the government of Nigeria the gist of his arguments in Geneva during the last few days.

The two ministers said that they are looking forward to the establishment of resident Missions in their respective capitals shortly.

Prof. Peiris observed that the developing world has a particular interest in ensuring that organs of the United Nations system, such as, the Human Rights Council, are not politicized, in the sense that they become instruments for giving effect to decisions made by power blocs for political reasons. If these bodies are to retain their practical relevance and usefulness in the modern world, there is the compelling need to preserve and indeed strengthen the culture that enables member States to formulate their opinions and to vote on the merits of a specific matter without undue pressure from powerful countries. If political and strategic alignments, rather than recourse to an issue based approach, are seen to determine voting patterns, the actual conduct of these bodies, over time, will move further and further away from the value system underpinning the Charter of the United Nations, the Minister observed.

Professor Peiris emphasized that external intervention at a time when domestic procedures are vibrant and moving forward, is entirely counterproductive in terms of achieving results on the ground.

Nothing is more crucial, he suggested, than ensuring that the well being of countries recovering from the ravages of terrorism — which should clearly be the sole aim and objective — should not be lost sight of in the interplay of global forces motivated by other agendas. It is important, he continued, to recognize in this context the distinction between co-operation and imposition: while the international community admittedly has a constructive role to play, it must not seek to impose its will in an arrogant and insensitive way.

“Sri Lanka, having shaken off the scourge of terrorism against overwhelming odds, needs the space and the time to continue its domestic process in keeping with local aspirations and within the framework of its own legal and cultural systems.

This has been acknowledged by perceptive commentators from the Western world, like Lord Rogan of Lower Iveagh, whose deep familiarity with the complexities of the Northern Ireland situation enhances the value of his views, Minister Peiris said.

Countries of Asia and Africa are the heirs to rich civilizations which equip them to deal effectively with issues , however challenging, which confront them in modern times. Nuances of context cannot be relegated in response to pressure if sustainability of solutions continues to be regarded as the priority requirement, the Minister pointed out.

A dinner hosted by the Foreign Minister of Nigeria in honour of the visiting Sri Lankan Foreign Minister was attended by a large number of Ambassadors and High Commissioners who were informally briefed by Prof. Peiris.