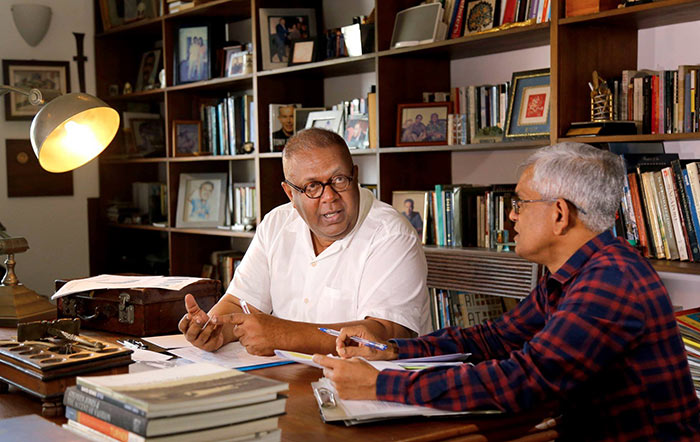 Finance Minister Mangala Samaraweera in conversation with Treasury Secretary Dr. R.H.S. Samaratunga while putting the final touches to the Budget – 2019 at the Minister’s “Rainbow End” private residence at Gorakana- Panadura yesterday. Minister Mangala Samaraweera will present the Budget – 2019 at 1.30 pm on Tuesday in Parliament.

Finance Minister Mangala Samaraweera said yesterday that the government’s maiden budget for 2019 is to be presented in parliament tomorrow (5) and will further open market policies and liberalisation.After the government presents its budget proposals, a debate would be held for a month before it is put to a final vote. Commenting on the budget, Minister Samaraweera said it would be called an ‘Enterprise Sri Lanka’ budget. “It is empowering and nurtures the poor,” he said.

Asked whether there would be concessions for public servants and farmers, he said, “We are not going to give handouts. We are helping people to help themselves. We are giving them a fishing rod instead of the fish,” he quipped.

The United National Party (UNP)-led government could not present its budget as planned because President Maithripala Sirisena brought about a regime change on October 26, 2018. The new government lasted only for 52 days. After the UNP was restored back to power, it presented a Vote on Account in parliament to allocate money from the consolidated fund for the government’s business for the first quarter of this year.The fully-pledged budget will be presented tomorrow to make allocations for the rest of the year.