Missing Malaysia Airlines plane ‘may have turned back’ 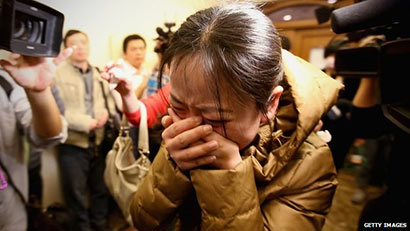 Radar signals show a Malaysia Airlines plane that has been missing for more than 24 hours may have turned back, Malaysian officials have said.

Rescue teams looking for the plane have now widened their search area.

Investigators are also checking CCTV footage of two passengers who are believed to have boarded the plane using stolen passports.

Flight MH370 from Kuala Lumpur to Beijing disappeared south of Vietnam with 239 people on board.

Air and sea rescue teams have been searching an area of the South China Sea south of Vietnam for more than 24 hours.

But Malaysia’s civil aviation chief Azharuddin Abdul Rahman told a press conference in Kuala Lumpur that the search area had been expanded, to include the west coast of Malaysia.

He also said five passengers booked on to the flight did not board, though their luggage was removed.

Air force chief Rodzali Daud said the investigation was now focusing on a recording of radar signals that showed there was a “possibility” that the aircraft turned back from its flight path.

Earlier Malaysia’s transport minister, Hishammuddin Hussein, said that at least four names on the passenger list were “suspect”, but the whole manifest was being investigated.

It follows reports that two of the passengers listed as travelling – an Italian and an Austrian – were not actually on the flight.

They both reportedly had their passports stolen in Thailand in recent years.

Mr Hussein said international agencies including the FBI had joined the investigation and that all angles were being examined.

“Our own intelligence have been activated, and of course, the counterterrorism units… from all the relevant countries have been informed,” he said.

“The main thing here for me and for the families concerned is that we find the aircraft.”

The passengers on the flight were of 14 different nationalities. Two-thirds were from China, while others were from elsewhere in Asia, North America and Europe.

When he was asked earlier whether terrorism was suspected as a reason for the plane’s disappearance, Malaysian Prime Minister Najib Razak said: “We are looking at all possibilities, but it is too early to make any conclusive remarks.”

It reportedly went off the radar south of Vietnam.

Malaysian Airlines had previously said it last had contact with air traffic controllers 120 nautical miles off the east coast of the Malaysian town of Kota Bharu.

Distraught relatives and loved ones of those on board are being given assistance at both the arrival and departure airports.

Many have expressed anger at the lack of information.

“I can’t understand the airline company. They should have contacted the families first thing,” a middle-aged woman told AFP news agency at Beijing airport, after finding out her brother-in-law was on the flight.

Some relatives said they were still hoping for miracle, reports the BBC’s John Sudworth in Beijing.

But many others will have concluded that there is little hope of aircraft being found, our correspondent adds.

The aerial search was suspended overnight but resumed on Sunday morning.

Malaysia and Vietnam have both sent planes and naval vessels to look for the missing flight.

The US is sending the USS Pinckney, an Arleigh Burke-class guided-missile destroyer, which could be in the central search area within three hours.

US transport safety experts are also joining the investigation.

Singapore is also involved, while Vietnam sent aircraft and ships and asked fishermen in the area to report any suspected sign of the missing plane.

Texas firm Freescale Semiconductor says 20 of its Malaysian and Chinese employees were on the flight, according to a statement on its website.

Malaysia’s national carrier is one of Asia’s largest, flying nearly 37,000 passengers daily to some 80 destinations worldwide.

Correspondents say the route between Kuala Lumpur and Beijing has become more and more popular as Malaysia and China increase trade. 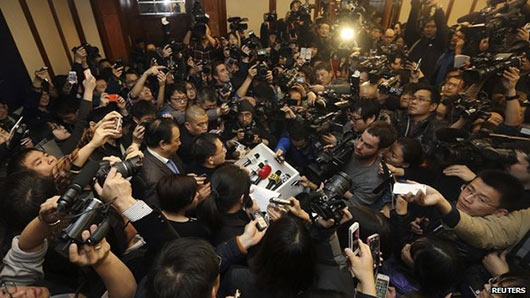 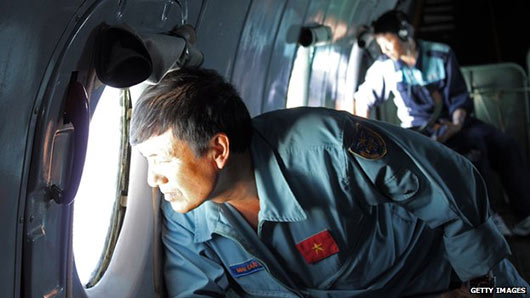 Home » Missing Malaysia Airlines plane ‘may have turned back’