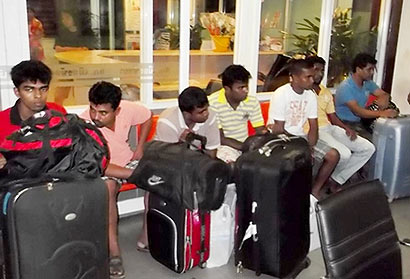 While all entered the kingdom on legal visas, authorities took them into custody as it is believed they are part of an ongoing human-trafficking operation run with the assistance of Thais to funnel workers from Sri Lanka to a third country.

Sixty-four Sri Lankans were apprehended Dec. 19 at the Bai-Yok Resort Dec. 19 in the Rong Poh neighborhood. A local resident said a Thai woman had been seen checking in on the Sri Lankans and had been responsible for finding them temporary quarters before being shipped out via Laem Chabang Port to another country. About 100 Sri Lankans previously had been moved. (Source: Pattaya Mail)