Murali, Chennai’s son-in-law, says ‘not end of the world’ 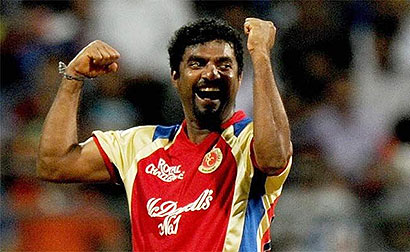 The city of Chennai, in many ways, has been a second home for Muttiah Muralitharan. Besides being a Tamil, the former Sri Lankan off-spinner is married to an Indian who belongs to the city. Moreover, Muralitharan represented the Chennai Super Kings during the first three seasons of the Indian Premier League (IPL).

But with the Tamil Nadu government having declared the state capital a ‘no-Sri-Lankan-zone’, Muralitharan will in all likelihood be forced to give Chennai a miss during the sixth edition of IPL starting next month.

And the 40-year-old Sri Lankan spin legend expressed his disappointment at the unsavoury developments.

“It’s sad that the Tamil Nadu government doesn’t want us there. It’s always unfortunate when people in power start mixing politics with sports. So if they don’t want me in Chennai then I won’t go. I can’t do anything else about it,” Muralitharan told The Indian Express on Tuesday.

Muralitharan, who now represents Royal Challengers Bangalore (RCB), however, confirmed his participation in IPL-6 and said that he will be very much a part of RCB’s campaign.

“The IPL is a great tournament. And I love being a part of it. I now play for Bangalore and I’m sure our fans there will be looking forward to seeing us in action. So what if Chennai doesn’t want us. It’s not the end of the world. I’ll still be a part of the team in all other cities and enjoy their support,” he added.

In the aftermath of the TN government’s move, many former Sri Lankan cricketers such as Arjuna Ranatunga have asked the 13 Sri Lankan players, including Muralitharan, to boycott IPL-6 as a whole. But Muralitharan urged his compatriots to take a more pragmatic stand.

“It’s disappointing for sure but we are entertainers after all and should not get involved with the politics. Our job is to go out there and perform. The worst case is that we will be left out of the team for that one match. Eventually the decision will be left to the individual but I’m sure the IPL as a whole will not be affected by this,” said Muralitharan.

Muralitharan added that the ban also affected him at a personal level considering the deep-rooted links he shares with Chennai. And also because he is a Tamil.

“I am a Tamil. But I’m a Sri Lankan first. And the ban means, I’m not wanted there either. I can assure you that there has been immense peace all around Sri Lanka since the war ended and the Tamils are living very happily here. They are treated equally well,” he explained. (Courtesy: Indian Express)

5 Responses to Murali, Chennai’s son-in-law, says ‘not end of the world’

Home » Murali, Chennai’s son-in-law, says ‘not end of the world’