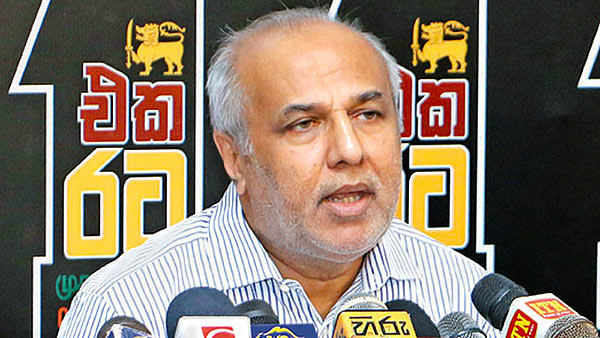 Proper investigations should be conducted on any substantial number of fire arms or other items recovered during search operations, irrespective of where they are found, SLMC Leader and City Planning and Water Supply Minister Rauff Hakeem said yesterday.

Minister Hakeem pointed out that no leader of the Muslim community would defend any such party responsible for keeping such weapons.

“The Muslim community is totally against violence,” he said. Hakeem further said that places of worship should not be used to instigate any kind of attack on anybody. Minister Hakeem also pointed out that it is important to properly investigate how such offensive items came into the possession of some mosques and those responsible for bringing such items in.

Minister Hakeem made these observations at a press briefing held at Temple Trees yesterday morning.

Speaking of the country-wide search operations following the Easter Sunday terror attacks, Hakeem said that the Armed Forces and the Police are conducting the operations with extreme care.

However, Minister Hakeem requested the media not to sensationalize some minor incidents considering the fact that a fear psychosis has gripped the entire nation.

Hakeem demanded that terrorist activities and other criminal activities should be identified and treated separately.

“If not, it would give the impression that the entire Muslim community is violence prone,” Minister Hakeem pointed out.

Minister Hakeem said “It would be important for those who are involved in the search operations to be mindful of the fact that whatever items that are seized and suspects taken in to custody, should be properly investigated while paying attention to the sensitivities of the innocent people. However, we should not take anything for granted. We appreciate the services rendered by the Armed Forces to uproot terrorism.

“Some sections of the media persons have sensationalised search operations. Such things should be avoided. These matters must be looked into purely by the Security Forces and Police, to properly analyze the situation and thereafter and bring those culprits to book. We are fully behind the security apparatus to get at the root cause of this small cult which was involved in these heinous crimes, in the community’s interest. We will lend our whole hearted cooperation to unearth the truth and expose this small cult and their handlers who are outside the country.

We kindly request that substantial care be taken to avoid hurting the sentiments of the Muslim community by giving some these matters undue attention,” Minister Hakeem further said.

Minister Hakeem said legal action can be taken against those unregistered mosques after investigations, if necessary.

Minister Hakeem also said that the Muslim community will closely scrutinize all Madrasa syllabuses and introduce a proper structure to be followed by all such courses.