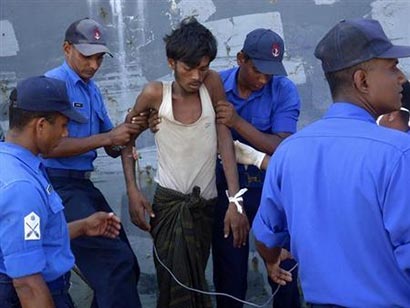 Myanmar nationals rescued from a sinking ship by the Sri Lankan Navy have told of throwing 98 people overboard after they died of starvation and dehydration, Sri Lanka’s police said on Monday.

Sailors rescued 31 adult males and a boy on February 16 when their damaged wooden ship began to sink about 250 nautical miles off Sri Lanka’s southeastern coast, Sri Lanka’s navy said on its website (www.navy.lk).

“They said they had carried food and water for only one month and they had been in the sea for two months after the ship engine stalled,” police spokesman Prishantha Jayakody told Reuters. “Their captain and 97 others have died due to dehydration and starvation. They also said they had thrown the dead bodies into the sea.”

The survivors said they were aiming to seek asylum in Indonesia and Australia and identified themselves as Muslims from a border village between Myanmar and Bangladesh, Jayakody said, without elaborating.

Fifteen survivors are still in hospital in southern Sri Lanka while 17 of them have been discharged and detained after appearing in court, he said.

An estimated 800,000 Rohingya Muslims live in Myanmar but are officially stateless. The Myanmar government denies them citizenship, regarding them as illegal immigrants from Bangladesh, which does not recognise them either.

The United Nations estimates about 13,000 boat people, including many Rohingyas, fled Myanmar and neighbouring Bangladesh in 2012, a sharp increase from the previous year.

On February 2, the Sri Lankan navy rescued 127 Bangladeshis and 11 Myanmar nationals in an overcrowded wooden vessel that had begun to sink 50 nautical miles east off Sri Lanka’s eastern coast.

The members of this group of 138 people are still in a detention centre near the capital Colombo, police said. (Reuters)