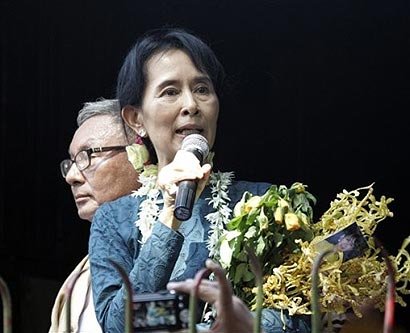 YANGON, Myanmar – Myanmar democracy leader Aung San Suu Kyi, freed from seven years of house arrest, told thousands of wildly cheering supporters Sunday that she would continue to fight for human rights and the rule of law in the military-controlled nation. She called for face-to-face talks with the junta’s leader.

She spoke to about 5,000 people who crowded around the dilapidated headquarters of her political party, the first stop for the Nobel Peace Prize laureate after leaving the lakeside residence that had been her prison.

“I believe in human rights and I believe in the rule of law. I will always fight for these things,” she said. “I want to work with all democratic forces and I need the support of the people.”

Suu Kyi, 65, told reporters her message to junta leader Gen. Than Shwe was, “Let’s speak to each other directly.” The two last met in secret talks in 2002 at the encouragement of the United Nations.

“I am for national reconciliation. I am for dialogue. Whatever authority I have, I will use it to that end. I hope people will support me,” she said.

She entered the small compound of her National League for Democracy as people shouted “We love Suu” amid thunderous applause.

Inside, she met with Yangon-based diplomats and was later scheduled to attend the funeral of a close friend and pay a customary visit to the city’s sacred Shwedagon pagoda.

“This is an unconditional release. No restrictions are placed on her,” her lawyer Nyan Win said.

There was speculation whether the charismatic and relentlessly outspoken Suu Kyi would use her freedom to challenge the ruling military head-on, or be more conciliatory.

She did not sound a strident note, saying she bore no grudge against those who had held her in detention for more than 15 of the last 21 years, adding that she had been well-treated.

Suu Kyi thanked her well-wishers and asked them to pray for those still imprisoned by the junta. Human rights groups say the government holds more than 2,200 political prisoners.

Speaking of her isolation while under house arrest, Suu Kyi said she “always felt free within myself. I kept myself pretty much on an even keel.” But she said that for years she had only listened to the radio, adding “I’d like to listen to human voices.”

In her first public appearance Saturday evening, Suu Kyi indicated she would continue with her political activity but did not specify whether she would challenge the military with mass rallies and other activities that led to her earlier detentions.

“We have a lot of things to do,” said Suu Kyi, who has come to symbolize the struggle for democracy in the isolated and secretive nation once known as Burma. The country has been ruled by the military since 1962.

But while her release thrilled her supporters — and also clearly thrilled her — it came just days after an election that was swept by the ruling junta’s proxy political party and decried by Western nations as a sham designed to perpetuate authoritarian control.

Many observers have questioned whether her release was timed by the junta to distract the world’s attention from the Nov. 7 election.

While welcoming the release, European Commissioner Jose Manuel Barroso urged that no restrictions be placed on her.

“It is now crucial that Aung San Suu Kyi has unrestricted freedom of movement and speech and can participate fully in her country’s political process,” he said.

President Barack Obama called Suu Kyi “a hero of mine.”

“Whether Aung San Suu Kyi is living in the prison of her house, or the prison of her country, does not change the fact that she, and the political opposition she represents, has been systematically silenced, incarcerated, and deprived of any opportunity to engage in political processes,” he said in a statement.

Others in Myanmar hailed Suu Kyi as the only one who might unite the impoverished country.

“She’s our country’s hero,” said Tin Tin Yu, a 20-year-old university student, standing near Suu Kyi’s house Saturday night. “Our election was a sham. Everyone knows it, but they have guns so what can we do? She’s the only one who can make our country a democracy.”

The new government is unlikely to win international legitimacy simply by releasing Suu Kyi because the recent election was so obviously skewed, according Trevor Wilson, a former Australian ambassador to Myanmar.

What happens next will depend on what kind of restrictions the regime puts on Suu Kyi — and what she says if she is allowed to speak, Wilson said.

“We will have to wait and see. It could be a little bit of a cat-and-mouse game,” Wilson said.

Suu Kyi has said she would help probe allegations of voting fraud, according to Nyan Win, who is a spokesman for her party, which was officially disbanded for refusing to register for the polls. Such actions have provoked military crackdowns in the past.

Myanmar’s last elections in 1990 were won overwhelmingly by her National League for Democracy, but the military refused to hand over power and instead clamped down on opponents.

Suu Kyi was convicted last year of violating the terms of her previous detention by briefly sheltering an American man who swam uninvited to her lakeside home, extending a period of continuous detention that began in 2003 after her motorcade was ambushed in northern Myanmar by a government-backed mob.

Suu Kyi took up the democracy struggle in 1988, as mass demonstrations were breaking out against 25 years of military rule. She was quickly thrust into a leadership role, mainly because she was the daughter of Aung San, who led Myanmar to independence from Britain before his assassination by political rivals.

She rode out the military’s bloody suppression of street demonstrations to help found the NLD. Her defiance gained her fame and honor, most notably the 1991 Nobel Peace Prize.

In 1989, she was detained on national security charges and put under house arrest.

Suu Kyi’s freedom had been a key demand of Western nations and groups critical of the military regime’s poor human rights record, which includes brutal military campaigns against ethnic minorities. The military government, seeking to burnish its international image, had responded previously by offering to talk with her, only to later shy away from serious negotiations.