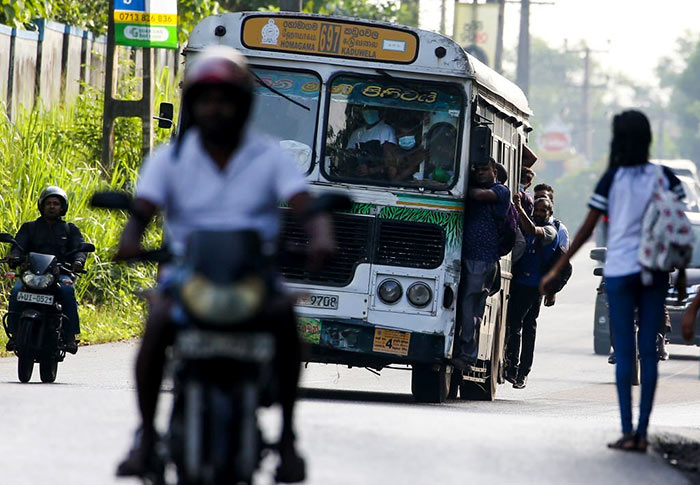 Passengers travel on the door of a public transport bus in Colombo, Sri Lanka. (Photo by Pradeep Dambarage / NurPhoto via Getty Images)

Due to the price reduction of diesel on two occasions by Rs. 25, the amount that can be reduced in bus fares is currently being calculated, Director General of the National Transport Commission (NTC) Nilan Miranda said.

He said the price of a litre of diesel was reduced by Rs.15 with effect from midnight yesterday (December 02) and efforts are underway to implement a bus fare reduction as well.

Accordingly, he said that the relevant calculations will be forwarded to the Minister of Transport today and if approved, will be made public.

He added that bus fares of both Sri Lanka Transport Board (SLTB) and private buses will be revised under such circumstances.

Miranda also stated that a decision in this regard will be announced in two days adding that the NTC is striving to ease the burden on the public.

Meanwhile, Minister of Transport and Highways Bandula Gunawardana said a discussion will be held tomorrow at 10:00 AM pertaining to fares of buses deployed on expressways.

The Minister said the talks will be held with the National Transport Commission.