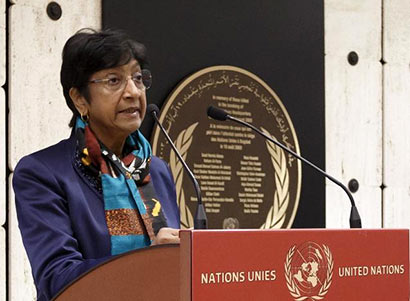 The United Nations Human Rights Commissioner Navi Pillay has called for an international probe into war crimes committed in Sri Lanka during the final stages of its ethnic conflict, according to a media report on Sunday. Her report, said to have been given to the Sri Lankan government recently, recommends setting up of an international inquiry mechanism to further investigate the alleged violations of international human rights and humanitarian law and monitor any domestic accountability process. The report also mentions emergence of new evidence on what happened in the final stages of the armed conflict, Colombo-based newspaper The Sunday Times, which claims to have accessed the report, said.

The report said she reiterates concerns about the continuing trend of attacks on freedom of expression, peaceful assembly and association; rising levels of religious intolerance; and continued militarisation — points she had emphasised while wrapping up her week-long visit to Sri Lanka in August 2013.

Soon after, making her oral submission at the 24th session of the Human Rights Council in Geneva in September, she set a March 2014-deadline for the government to engage in a credible national inquiry into reported cases of human rights violations failing which the international community would establish its own inquiry mechanism. The Sri Lankan government did not officially respond to the report.