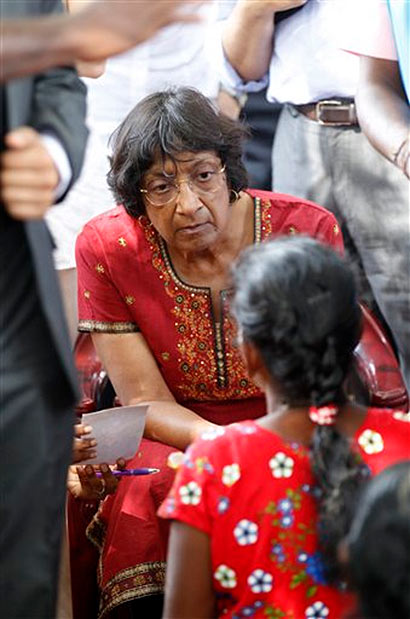 UN Human Rights Commissioner Navi Pillay has visited Jaffna to meet relatives of people who disappeared at the end of the war. According to the BBC Tamil families complained to her about missing relatives, military land grabs and life without basic facilities.

Ms Pillay is the most senior UN official to visit the north since Secretary General Ban Ki-moon in 2009.

She told survivors that she would raise their complaints with the government.

She is due to meet senior ministers including President Mahinda Rajapaksa later this week.

About 300 people demonstrated in Jaffna to complain that the UN was not doing enough to investigate enforced disappearances and land-grabs.

One of the protesters, Ananthi Sasitharan, is the wife of Velayutham Sasitharan, a top Tamil LTTE leader.

“I am confident that he is alive. He is somewhere in a secret detention centre,” she told the Reuters news agency.

At the same time another demonstration was held by pro-government Buddhist monks in Colombo, calling on Ms Pillay to leave the country and stop criticising its rights record.

She arrived in Sri Lanka on Sunday for a fact-finding mission.

Ms Pillay has told reporters that her job is to ensure that the government is conforming to human rights standards agreed by all nations.

Ms Pilay’s seven-day visit comes after a second US-sponsored UN resolution in March urged Colombo to carry out credible investigations into killings and disappearances during the war, especially in its final stages.

Human rights activists in Jaffna say more than 700 people disappeared between 2006 and 2009.

Ms Pillay on Tuesday also visited the former LTTE stronghold of Killinochi and the eastern town of Trincomalee.

Her visit comes as Canada has called for a boycott of a Commonwealth summit scheduled to take place in the Sri Lankan capital Colombo in November, BBC reports. 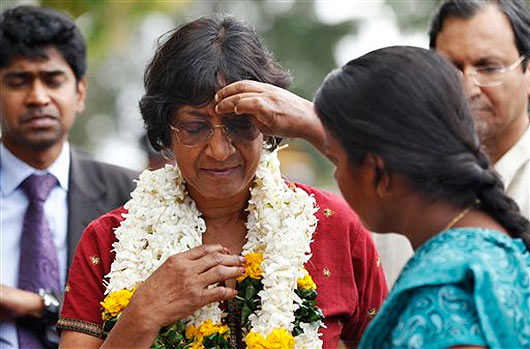