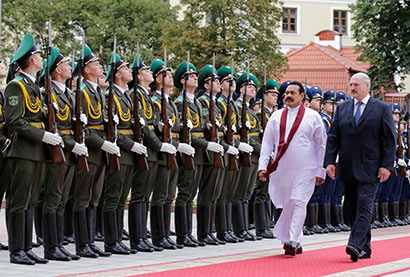 Sri Lanka and Belarus today agreed to establish an inter-parliamentary association to ensure cooperation between the Parliaments of the two countries. Such an agreement was reached with several objectives: To enhance mutual understanding in political, economic and social sectors; to ensure mutual cooperation in international fora; and to further cooperation in economic, trade and business sectors.

These agreements were reached when President Mahinda Rajapaksa met with the Chairman of the House of Representatives of the Belarus National Assembly Mr. Vladmir Andreichenko and the Chairman of the Council of the Republic of the National Assembly of Belarus Mr. Anatoly Rusetski at the State House in Belarus today, the final day of the President’s three-day state tour to Belarus. During the discussions, President Rajapaksa stressed the importance of maintaining strong parliamentary relations between the two countries in ensuring strong bilateral ties. Having entered Parliament in 1970 and having served four decades of his life as a parliamentarian, the President spoke about the close affiliation between his political career and the Sri Lankan Parliament, adding that even after being elected to the executive presidency in 2005, he still visits Parliament every three months.

President Rajapaksa also spoke about the inter-parliamentary associations that Sri Lanka has already established with the participation of all political parties represented in Parliament.

“Your views about parliamentary cooperation are similar to ours,” Mr. Andreichenko said. “We will establish a Belarus Parliamentary Association with Sri Lanka in the near future. We hope you will do the same.”

Mr. Andreichenko said he believes that establishing inter-parliamentary associations will pave the way for closer cooperation in the areas of education and culture, going beyond economic and trade cooperation. Agreeing with Mr. Andreichenko, President Rajapaksa added that it will also give people of both countries an opportunity to interact with each other.

During the morning, President Rajapaksa also made a floral tribute at a war memorial in Belarus, built to honor soldiers who sacrificed their lives during World War II.

On this third and final day of his visit, President Rajapaksa also attended the launch of a tourism forum at the Crown Plaza Hotel, organized to promote tourism between the two countries. Deputy Prime Minister of Belarus Mr. Anatoly Tozik and the Cultural Minister Mr. Boris Svetlov were also present at the occasion.

The President and the Sri Lankan delegation also visited a heavy vehicle and tractor manufacturing plant.