Navy springs into rescue flood victims in the North 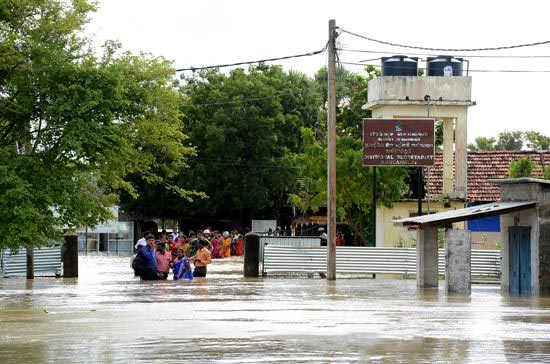 Following the directives of the Office of Chief of Defence Staff and based on information from the Disaster Management Centre, naval personnel are currently engaged in relief and rescue missions in the districts of Mullaitivu and Killnochchi which are worst affected by the inclement weather condition.

Accordingly, the Navy has deployed 09 dinghies and 06 relief teams in aforesaid areas since yesterday (22nd December), to assist flood victims.

Naval personnel attached to the North Central Naval Command were promptly pressed into action following the flood situation and they reached displaced Tamil community residing in Iranamadu, Shamikulam, Oddusudan and Wasanthampuram areas to rescue the flood-stricken people. As such, the Navy relief teams have transferred 103 civilians to safe locations as of now.

Meanwhile, a team of naval personnel safely transferred a pregnant woman who was caught in the floods and the effort received an overwhelming response from the Tamil community. Further, the Navy continues to extend its relief and rescue efforts regardless of the inclement weather.

Home » Navy springs into rescue flood victims in the North