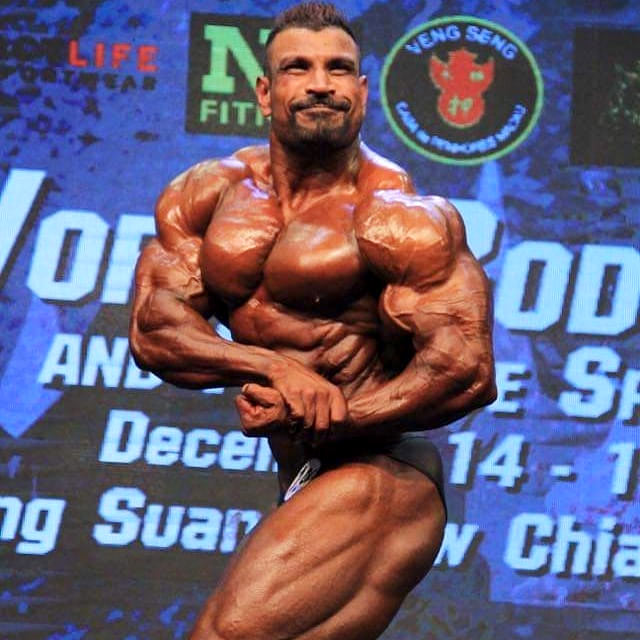 The freakishly ripped beast made a triumphant return to his home country less than 12 months after he was reportedly locked in an ugly feud with government officials, who dramatically moved to ban him from competing.

Also known as the Black Lion of Asia, Pushparaj claims Sri Lanka Bodybuilding Federation officials tried to stop him competing in international competitions last summer because of an ongoing war of words between him and top body building officials in the country.

He claims the federation reached out to the Global Bodybuilding Organisation behind last year’s Mr Atlas competition in Los Angeles to have him banned — and claims that intervention was the reason his VISA was initially rejected.

In a matter still hotly disputed, he also says the same officials were behind widespread rumours he took performance enhancing drugs.

Those rumours saw him stripped of the little government funding he had been receiving.

He took the extraordinary step in January of calling a press conference to clear his name and deny the accusations, he claims Sri Lanka Body Building Federation officials were behind.

It had been an awkward cold war between Pushparaj and Sri Lankan sports regulators ever since.

He says without personal sponsors he wouldn’t have been able to afford to compete overseas.

It was as ugly as it gets. Then — in an instant — all was forgiven.

All he had to do was win gold at last weekend’s World Bodybuilding and Physique Sports Championships (WBPF) held in Thailand.

Just like that, he was a national hero again.

Pushparaj took out first place in the over 100kg category at the event in Chiang Mai.

It was the biggest moment of his career, eclipsing his gold medal at the Asian Bodybuilding and Physiques Sports Championship in South Korea last year.

The achievement was celebrated in Sri Lanka with similar gusto to when the Asian country won the 1996 Cricket World Cup.

On Friday the minister of housing Sajith Premadasa awarded Pushparaj Rs 1 million as prize money for his big win in Thailand.

The money was allocated out of the acting Housing, Construction and Cultural affairs minister’s personal expenditure budget. The money was handed over during a civic reception at a government building crawling with reporters and TV camera crews.

It is a fairytale comeback for a man, black-listed just a few months ago.

Pushparaj had told earlier his broken relationship with federation officials almost forced him to quit.

“I want to bring fame to my country,” he was quoted saying.

“I have no interest in medals or do not seek personal glory. I cried when the federation refused to allow me to represent my country. However, I did not give up.”

The crowning moment of his comeback is a fairytale seven years in the making after he first received bodybuilding federation accreditation in 2012.

He won his first major competition by winning a gold medal in the 2014 Mr. Sri Lanka contest.

He said he initially got into body building as a natural progression after lifting weights as part of his training regimen for his high school athletics team.