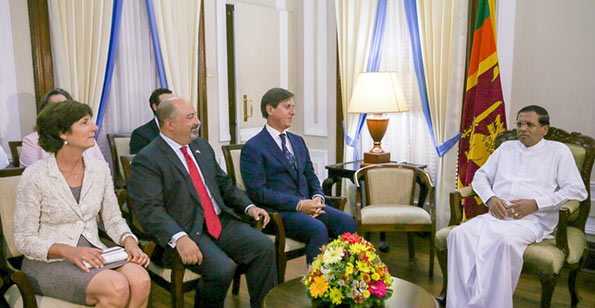 President Sirisena, referring to close bilateral relations with Sri Lanka and the countries represented by the new envoys expressed confidence that they would strive to further strengthen bilateral friendship and cooperation in many areas including trade, investment and tourism.

The President also recalled the close economic cooperation between Sri Lanka and the three counties represented by the new Ambassadors. He thanks them for the continuous assistance provided for Sri Lanka’s economic development by the United States, Italy and the Netherlands. He also expressed gratitude for the support given by those countries in international forums.

American Ambasador Keshap conveyed best wishes from President Obama and Secretary State John Kerry to President Sirisena and assured the fullest US support to Sri Lanka’s economic development and reconciliation. He said that his country wishes to take bilateral relations with Sri Lanka to a new height.

The Netherlands Ambassador Ms Doornewaard assured the President that her country was ready to assist Sri Lanka’s development activities and offered support for implementation of President Sirisena’s economic and development policies.