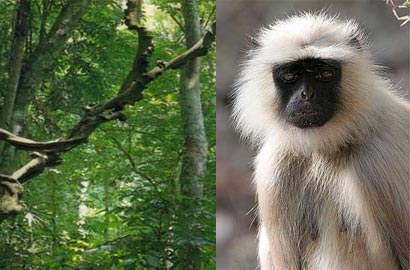 A new variety of Sri Lankan monkeys have been discovered by a nature conservation group doing their observations in the Sinharaja forest.

The attractive species have white fur on the body and black hair on the face.

The group who have identified this new kind, members of Galle Wildlife Conservation Association said they saw the white monkeys in the Unesco World heritage site of Sinharaja Rain Forest.

The researchers said it is now confirmed that the new species was not an albino of the common black monkey found in the forest.

Chairman of Galle Wildlife Conservation Association Madura de Silva said that they traced this white monkey species in several places in the southern region of the Sinharaja forest during a survey conducted with the assistance of the Biodiversity Unit of the Ministry of Environment.

The group said they took the photographs of the animals following the information from the treacle tappers in the border villagers of Sinharaja.

“The research team has observed 26 monkey troops in the rain forests and home gardens around Galle and Matara districts and found 30 individuals with unusual white color in 14 troops.

“The group comprising Madura de Silva, Nadika Hapuarachchi and P.A. Rohan Krishantha, reports that the white monkey is a color morph of the southern purple faced leaf langer and systematic DNA testing is needed to determine subspecies and form accurate maps of locations.”