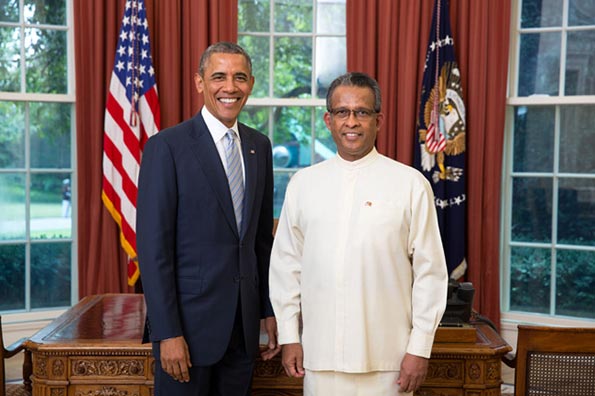 In a sign of improving relations with the U.S., Sri Lanka has terminated lobbying contracts worth tens of thousands of dollars a month that the previous government had signed to help it win friends in Washington amid war crimes allegations, the nation’s ambassador says.

The investment in lobbyists to foster political and economic ties had gathered steam last summer, in the dying months of the administration of then-President Mahinda Rajapaksa, but with little apparent benefit, as Sri Lanka’s international isolation deepened over its refusal to credibly probe civilian deaths during the civil war that ended 2009.

But political change inside Sri Lanka itself has done the trick. There has been a turnaround in the U.S. relationship after new President Maithripala Sirisena won Jan. 8 elections and promised democratic reforms and accountability for human rights violations.

Sirisena was elected in large part because of public dismay over the rising cost of living on the South Asian island, where the monthly per capita GDP is about $540. Rajapaksa was also widely criticized for nepotism and alleged government corruption.

Washington-based lobbying groups are often hired by foreign governments to help win the ear of U.S. officials, lawmakers, media and other opinion-makers. Justice Department online records show Sri Lanka signed eight contracts with such groups from 2014, with monthly fees ranging from $5,000 to $75,000.

“The new government does not see a reason or requirement to have lobbying groups at this juncture,” Sri Lankan Ambassador Prasad Kariyawasam told The Associated Press on Friday. “To my knowledge, all those contracts have been terminated since the election of the new government.”

Vinoda Basnayake of Nelson Mullins Riley and Scarborough LLP said soon after the election, the embassy informed his company that its $35,000 monthly contract was not being extended. Nelson Mullins was one of several groups hired to serve Sajin De Vass Gunawardena, a lawmaker who had advised Rajapaksa on foreign affairs. Basnayake said its fees for the last quarter had been paid in advance.

But Connie Mack, executive vice-president of Levick Strategic Communications LLC, said its client, Sri Lanka’s central bank — whose chief has been replaced by the new government — was three months or $180,000 in arrears on payments for the contract it terminated Jan. 28. Mack said he planned to meet with the Sri Lankan ambassador soon to discuss the issue.

Kariyawasam, a career diplomat who became ambassador last July, told the AP he did not know if any payments to lobbyists were outstanding because he did not sign any of the contracts.

The Obama administration is keen to improve relations with Sri Lanka, which forged closer ties with China under Rajapaksa. The island lies off the coast of southeastern India, on sea lanes linking East Asia and the Middle East.

New Sri Lankan Foreign Minister Mangala Samaraweera visited Washington this month, winning U.S. support for a delay in the publication of a U.N. investigation into the war. The report is politically sensitive in Sri Lanka because it could implicate elements of the nation’s military that crushed the resistance of ethnic Tamil rebels.