WOULD-BE asylum seekers from Sri Lanka are being told there is no prospect of them working in Australia while their claims are assessed, and that they will be forced to survive on ”minimal subsistence” from the government.

A public relations blitz by Australian officials is trying to dissuade Sri Lankans, tempted by people smuggler’s promises of visas and well-paid work in Australia, from boarding boats.

The deputy secretary of the Department of Immigration and Citizenship, Peter Vardos, said in Colombo that despite the Nauru and Manus Island detention centres being full, asylum seekers given bridging visas to live in Australia would have no capacity to earn money.

”That will not happen – they will not have work rights and they will have minimal subsistence from the federal government to help them,” he said.

Asylum seekers will be eligible for 89 per cent of the NewStart allowance, about $438 a fortnight.

”One selling point of the people smugglers is that people can come to Australia while their claims are being processed … that they can work in the Australian community, earn an income and repatriate remittances to their country. That will not happen,” Mr Vardos said.

Australia wanted skilled migrants. ”We do not need semi- or unskilled people, we do not need people who unilaterally show up on our shores and say ‘Give me a job’. I can appreciate why people seek a better life for themselves, but it’s a risky journey and people die.”

Earlier this month, the department’s regional director for South Asia, Jose Alvarez, said in Colombo many on the boats to Australia wanted jobs, and had been sold ”lies and false promises” by the smugglers.

”The ones we returned … were all about the fact that once they arrive they’ll be able to go into the community and work and then send the money back. It was all about having job opportunities.”

A video message from the Immigration Minister, Chris Bowen, has been broadcast to the Sri Lankan media in English, Sinhala and Tamil.

”People are dying at sea on unseaworthy boats, based on false promises and lies about what awaits them in Australia. This is unacceptable,” he said.

Of the 6192 Sri Lankans who have arrived by boat in Australian waters this year, 511 have been returned to Sri Lanka. The department says it does not keep statistics on the ethnicity of asylum seekers. Sri Lanka maintains that about 90 per cent of those leaving the country are members of the Tamil ethnic minority. But the overwhelming majority of those being returned to Sri Lanka as economic migrants are Sinhalese.

Three years since the end of the 26-year civil war between the Sri Lankan government and the separatist Tamil Tigers, the country’s Tamil minority still suffers serious persecution.

At the UN review of Sri Lanka’s human rights record this month, the Australian government said to Sri Lanka it needed to ”take action to reduce and eliminate all cases of abuse, torture or mistreatment by police and security forces” as well as ”all cases of abductions and disappearances” in the country. 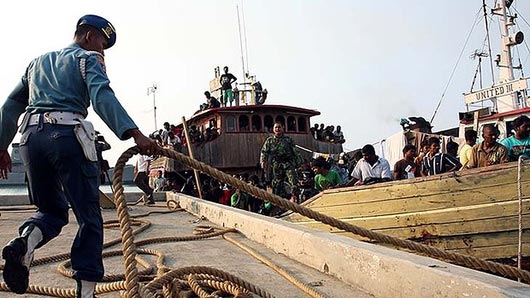