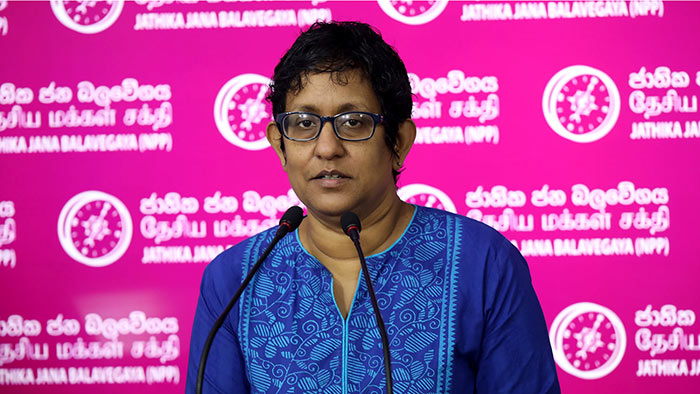 There has been no government in the known history of this country that incurred so much public displeasure within such a short time as two years, JVP MP DR Harini Amarasuriya said on Saturday.

Addressing the media at the JVP head office in Pelawatte, Dr Amarasuriya said that the government’s popularity was rapidly decreasing. “In the face of losing popularity and mounting public displeasure the government has resorted to racist politics. This has been a strategy used by many governments in this country for the past 73 years. The loss of lives and shedding of blood as a result of such strategy have been of no concern to them. Their motive is to cling to power despite public displeasure. We call on people not to fall for that trap. Communal disharmony would help none but the government to stay in power. They need it now to divert public attention from their problems such as price increases and shortages of essential commodities.”

Senior lawyer Lal Wijenayake stressed the need to ensure judicial independence, which he said could not be achieved without the rule of law. It is doubtful whether rule of law exists now; if you look at the way the Attorney General has been withdrawing cases.

Attorney-at-Law Sunil Watagala said that the country’s democracy was under siege and was facing serious threats. “This started when the President during a Gama Samaga Pilisandarak programme stated that his word took precedence over circulars. Five including the Convener of the Inter University Students Federation have been detained for over 100 days. Fr Cyril Gamini too is fearing arrest. Ven Ganansara thero has been handpicked to head a presidential task force. The Bar Association of Sri Lanka too has condemned these acts. In the meantime, cases against top government ministers are being withdrawn by the Attorney General. We call on the Attorney General to resign with respect because he is paid with public funds to serve the interests of the people.

“We call on people not to be duped by government tactics, the latest being the show of dissension within the government ranks. None of these dissenters including Ali Sabry, Wimal Weerawansa and Udaya Gammanpila have resigned. They cannot fool people all the time. The budget vote is to be taken in Parliament on 12 Dec. If they are not happy with the government, they can vote against it. They are running with the hare and hunting with the hounds.”