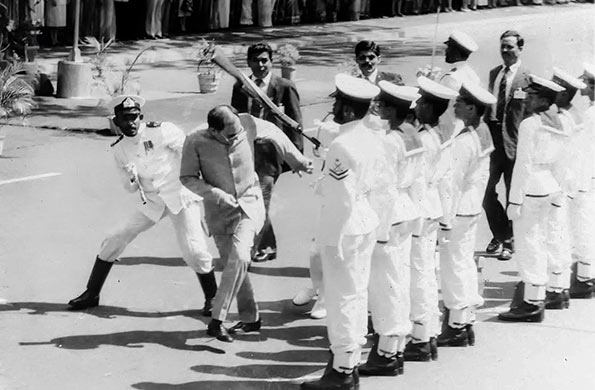 The radical Sinhalese-Buddhist party, the Bodu Jana Permuna (BJP), has refused to give an election ticket to Wijemuni Vijitha Rohana de Silva, who had hit Rajiv Gandhi with his rifle butt when the then Indian Prime Minister was reviewing a Guard of Honuor at Colombo on July 30, 1987, in the aftermath of  signing the controversial India-Sri Lanka Accord.

The CEO of BJP, Dilantha Vithanage, has said that Wijemuni was not given a ticket to fight the August 17 Lankan parliamentary elections because he wanted the leadership of the party poll campaign in Gampaha when he was not even a member of the BJP or its parent organisation, the Bodu Bala Sena (BBS). “Wijemuni is also known to be politically inconsistent,” added.

However, it was the BBS general secretary, Ven Galagoda Atthe Gnanasara Thera, who had invited Wijemuni to contest. But the monk had come under pressure from his colleagues not to entertain Wijemuni.

When Wijemuni attacked Rajiv Gandhi with a reversed Lee-Enfield rifle at the Lankan President’s Palace, he was a 22-year-old rating in the Sri Lankan navy. A staunch Lankan nationalist he was enraged by the accord which he felt was imposed on Lanka by Rajiv Gandhi.