‘No rapes committed by Security Forces in North and East’ 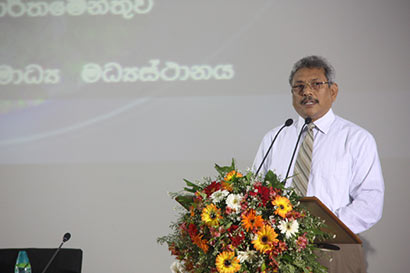 The members of the security forces have not been involved in the any sexual assault, in North and East, Defence and Urban Development Ministry Secretary Gotabaya Rajapaksa said. He said according to the statistics and revelations of a study conducted at hospital level no evidence was found that the personnel attached to the security forces were involved in sexual assaults in North and East provinces.

The Defence Secretary said that he initiated a study after a particular ambassador made a complaint quoting media that personnel attached to Security Forces were involved in sexual assaults in the North and East.

He made these observations at the seminar, ‘Crime, Corruption and National Security’, on the role of the mass media in raising public awareness on the prevention of crime and corruption held at the Information Department auditorium.

He said during the study, Police and hospital statistics were considered, the victims would not go to Police to lodge a complaint.

He added however the statistics on rape incidents in the North and East when analyzed revealed that rape has been committed by a very close relative like grandfather, father, uncle, brother, brother-in-law, step father etc, by a neighbour, by a known person and very rarely by a stranger.

He also said that there were three occasions when army deserters were involved in rapes in North, but it was in villages in Vavunia where Sinhala speaking families live.

He also said that the objective of those who make these baseless allegations may be to justify their attempts to evict the Security Forces from the North and East.

Home » ‘No rapes committed by Security Forces in North and East’