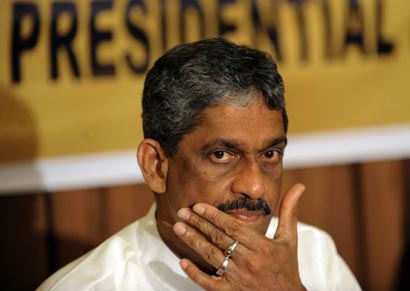 September 30, 2010: There are no special cells within the prison, said the Prisons Commissioner General Major General V. R. De Silva, speaking on the measures that will be taken with regard to Sarath Fonseka, as the President has approved the verdict of the court martial.

“From this point on, he becomes a prisoner. After we receive a copy of the President’s endorsement of the court martial from the Army headquarters or defence officials, he will be accepted as a normal inmate. There are no special cells within the prison,” he said

“However if the court says that special security will have to be provided for him, then he will be placed in a separate cell. If not, those who are handed over are not separated. But the usual security will be provided,” said the Prisons Commissioner General.