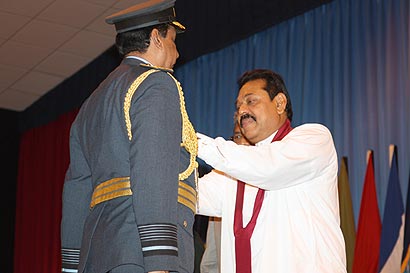 ‘North-East humanitarian operation’ medals were conferred today (Dec 14), upon personnel of armed services and police including civilians- who had directly engaged in humanitarian assistance programmes, in the quest of liberating North and East from a three decade prolonged terrorist tyranny.

H.E the President and C-in-C Mahinda Rajapaksa graced the inauguration ceremony of the national event held at Temple Trees this morning at 10.30.

The award ceremony of the Medal for North and East Humanitarian Operations to 680 Army War Heroes, 170 Navy War Heroes, 85 Air Force War Heroes and 65 Police War Heroes got underway after representatives of all three forces and the Police read out the citation for award of such medals. HE the President was conducted to the main hall in a colourful Army pageant.

Giving a symbolic meaning to numerous sacrifices made by thousands of War Heroes, the President at first pinned the Medals on Tri service Commanders and the Inspector General of Police before he moved to honour other War Heroes who sweated day and night to bring peace to Mother Sri Lanka. Accordingly, separate groups representing Tri services and the Police ranging from senior ranks to the lower ones were awarded the medals by the President.