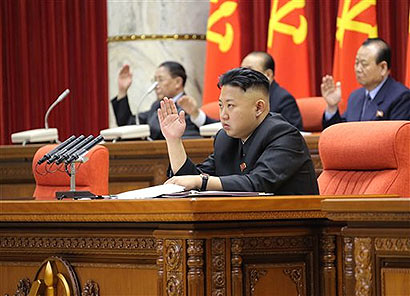 It was not clear if the missile was mounted with a warhead or whether the North was planning to fire it or was just putting it on display as a show of force, one South Korean government source was quoted as saying.

“South Korean and U.S. intelligence authorities have obtained indications the North has moved an object that appears to be a mid-range missile to the east coast,” the source said.

The Musudan missile is believed to have a range of 3,000 km (1,875 miles) or more, which would put all of South Korea and Japan in range and possibly also the U.S. territory of Guam in the Pacific Ocean. North Korea is not believed to have tested these mid-range missiles, according to most independent experts

North Korea has threatened a nuclear strike on the United States and missile attacks on its Pacific bases, including in Guam. Those threats followed new U.N. sanctions imposed on the North after it carried out its third nuclear test in February.

The missile was moved to the coast by train. The North has a missile launch site on the northeastern coast, which it has used to unsuccessfully test-fire long-range rockets in the past.

Japan’s Asahi Shimbun newspaper issued a similar report on Thursday, saying the North had moved what appeared to be a long-range missile to its east coast. (Reuters)