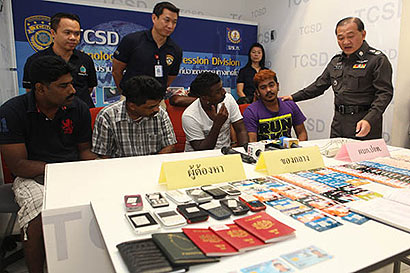 A gang of foreigners, four Malaysians and two Sri Lankans, have been arrested and charged with the fraudulent use of over 100 ATM cards to withdraw around 10 million baht cash in Thailand, the Economic and Cyber Crime Division announced on Wednesday.

Division chief Pol Maj Gen Phisit Pao-in said the police were informed by Siam Commercial Bank that the bank has been requested to investigate theft of users’ information and fraudulent use of electronic cards to withdraw cash in Thailand.

The investigators found out that the cards were used in the Pratunam area. Police sent to patrol the area discovered S.Saseelan, 43, withdrawing cash at an ATM. They asked to search hm and found 10 fake ATM  cards. The police searched his accommodation and later apprehend the five other suspects.

The police said they seized a total of 162 electronic cards and 18,000 baht cash.

Pol Maj Gen Phisit said the suspects confessed that they obtained blank electronic cards in Malaysia. The blanks were then encoded with information, obtained by using skimmers, off cards of people from countries such as Canada, the UK and Germany.

They would go separately to withdraw up to  60,000 baht each time from ATMs in Pratunam and Sukhumvit areas, and later hand the money over to an Indian they knew only as Asok. They were paid 10% of the money.

The suspects said they had been withdrawing the money for over a month, with the total combined value  approximately 10 million baht.

Police said the two Sri Lankan suspects are former members of the Liberation Tigers of Tamil Eelam who fled to Thailand. They were investigating whether terrorism funding is involved or not.

The six suspects have been charged with illegal access to a computer system, holding and using fake electronic cards and illegal entry to Thailand. Mr Asok is still at large. (Source: Bangkok Post)