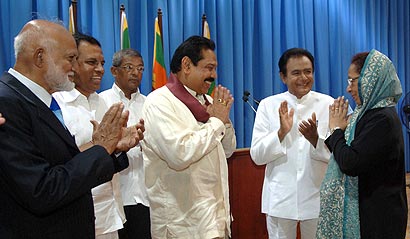 Leader of the Jathika Samagi Peramuna- National Unity Alliance (NUA) Mrs.Farial Ashraff met President Mahinda Rajapaksa and accepted her membership to join SLFP at Temple Trees on 18th February. More than 250 NUA members were participated with her at the occasion this morning.