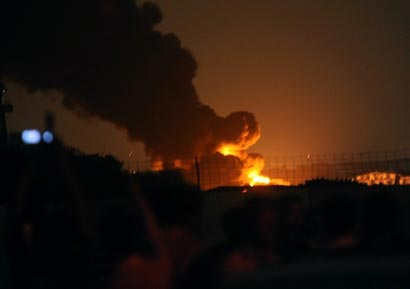 “The naval commandos and the naval marines are tightening their grips on them,” Pakistani navy spokesman Irfan Ul Haq told CNN around 5:30 a.m. Monday. “The situation is under control.”

Besides the four dead, Haq said that nine navy personnel were injured in the attack on the grounds of the Mehran base. He did not have the number of militants who died or were injured.

Sporadic gunfire could still be heard around 6:15 a.m. Monday, said Talha Hashmi, a witness at the scene. By then, though, he said there were no visible flames or smoke coming from the base, as had been reported earlier.

Two witnesses — Amjad Bashir and Hashmi — reported at least ten explosions in the subsequent hours, including two within 15 minutes of each other about five and a half hours after the assault began.

Each blast was typically followed by a sustained exchange of gunfire, Hashmi said. He said that several of the explosions — thought to be the result of at least one military aircraft and a fuel tank catching fire and releasing plumes of smoke — were particularly large.

The damaged plane is a P-3C Orion, according to Haq. Supplied by the U.S. government, the P-3C Orion is a “four-engine, turbo-prop, anti-submarine and maritime surveillance aircraft,” according to the U.S. Navy’s website.

The nation’s military personnel responded with what Pakistani Interior Minister Rehman Malik called a “major operation” at the naval base, which is about 10 kilometers (6 miles) from Karachi’s main airport.

According to the Pakistani navy’s website, the Mehran base “is efficiently supporting day and night operational activities of all (naval aviation) squadrons.” A host of courses are also offered on its grounds, from helicopter and air navigation instruction to sea survival.

Karachi itself, which is considered the main commercial hub of Pakistan, has seen a drastic increase in political, ethnic and religious violence in recent months.

Just over three weeks ago, three people were killed and at least 20 others were injured when a hand grenade exploded at a gambling club in the southern Pakistani city.

The grenade was tossed into the club by one of two unidentified people riding past the facility on a motorbike, according to Javed Baloch, a senior police official in Karachi.

The Taliban were behind an April 28 roadside bombing on a main road through Karachi that left at least five dead and 10 injured, according to Ihsan Ullah Ihsan, a spokesman for the group.

Haq said it was too early to determine if there are any connections to, or lessons to be learned from, the latest attack.

“Once this operation gets over, then the … assessment will take place to see if there is any similarity,” he said.