Over 50,000 applications for Korean jobs 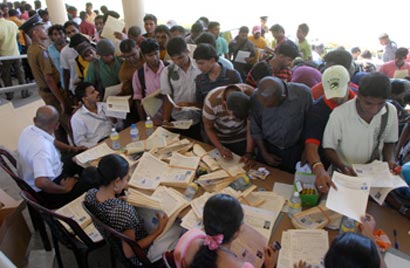 The Sri Lanka Bureau of Foreign Employment (SLBFE) yesterday said that 50,930 youths obtained applications from the Bureau to sit for the Korean language proficiency test from which 9,300 would be chosen for jobs in South Korea. The Korean language proficiency test, a compulsory requirement for youths aspiring for jobs in South Korea is to be held on October 8 and 9, this year. The SLBFE said that the number of applicants for the test had risen by about 22,000 from last year. The distribution of applications took place from August 8 to 11 at 28 centres islandwide.

However, a rush in Colombo on the first day resulted in a commotion among applicants and led to the Police being called to control the crowd.

The SLBFE then attributed the issue to the spread of misinformation and assured applicants that there was no shortage of applications. They told outstation youths to report to the nearest distribution centre instead of coming to Colombo.

The SLBFE said that following the incident on the first day, the distribution of applications up to August 11 had taken place smoothly. South Korea has become a popular destination among Sri Lankan youths who aspire for foreign jobs due to higher wages offered in the country for migrant workers.

Korean authorities recently announced that they would increase the annual job quota offered to Sri Lankans from the current 8,000 to 15,000 next year. The jobs are given under an agreement between the governments of Sri Lanka and South Korea.

Home » Over 50,000 applications for Korean jobs