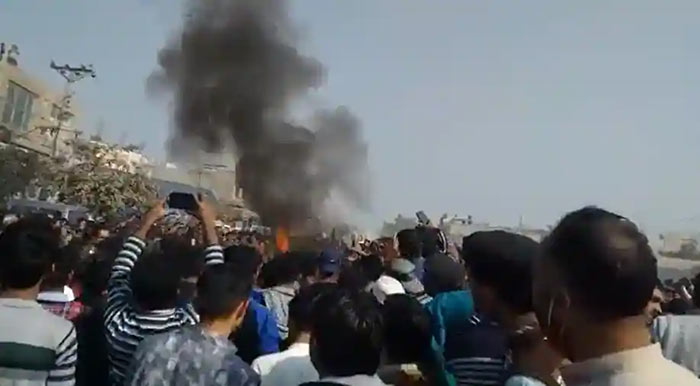 A frenzied mob in Pakistan tortured a Sri Lankan man to death and then burnt his body in public, according to local media reports.

The incident took place on Wazirabad Road in Sialkot on Friday, where reportedly the workers of private factories attacked the export manager, a Sri Lankan national, of a factory and burnt his body after killing him, the Dawn reported.

A heavy contingent of police has been sent to the area to control the rampaging crowd.

The police are yet to determine what caused the incident, but there are several reports indicating that the mob wanted to punish the man for committing “blasphemy”.

Videos shared on social media showed hundreds of men and young boys gathered at the site, purportedly chanting slogans of “Labbaik Ya Rasool Allah” (Here I am at your service, O Messenger of Allah).

Punjab Chief Minister Usman Buzdar termed it as a “very tragic incident”, while the spokesperson for Sialkot police said details would be shared with the media after the initial investigation.

“Every aspect of the incident should be investigated and a report should be submitted. Action should be taken against those who take the law into their own hands,” the chief minister said.

“The Sialkot DPO is present on the spot. All aspects of the incident should be investigated,” the IGP said.

The horrific act drew a sharp reaction from the international human rights, NGO Amnesty International’s South Asia, saying it is “deeply alarmed by the disturbing lynching and killing” of the Sri Lankan over a blasphemy accusation.”

The Friday incident bore resemblance to a similar attack that took place in the region in 2010 when an angry mob had lynched two brothers in the presence of police, declaring them dacoits.