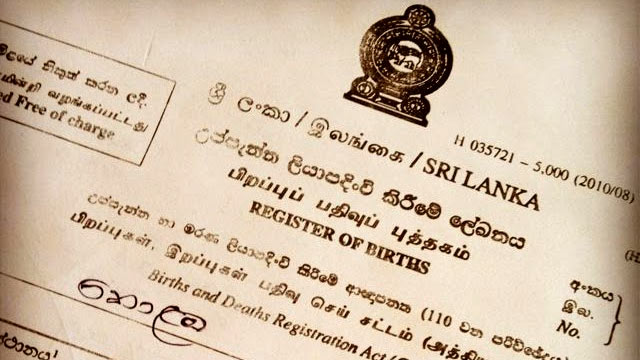 Future birth certificates will no longer contain a question about the marital status of parents, thus eliminating the stigma associated with children born out of wedlock.

The decision was announced by Registrar General N C Vithanage but had been a long time coming. It was a longstanding recommendation of the National Women’s Committee (NWC) before being taken up with the Parliamentary Subcommittee on Gender. Talks went on for at least two years with relevant Government institutions–including the Registrar General’s Department, the relevant Ministries, Pensions, Land and Immigration Department, said Swarna Sumanasekera, who headed the NWC at the time.

The Pensions Department and Land Department both opposed the decision on the basis that it would complicate inheritance and other entitlement in the event of other relationships. But a consensus was reached that, while the marital status would not be published in the birth certificate which is accessible to institutions such as schools, the Registrar General’s Department would still gather the relevant information which can then be viewed on a database as and when necessary.

“It was agreed that it should be removed from the actual birth certificate but the information would be in the system,” Mrs Sumanasekera, who resigned in December last year, said.

“A child should not suffer discrimination based on the marital status of her parents,” said Marini De Livera, former National Child Protection Authority Chairperson and also a former member of the NWC. “We hear horror stories of children who are taunted and bullied by their peers and even by teachers on the basis they are the offspring of an unwed mother.”

“It is a step in the right direction and better late than never,” she stressed.