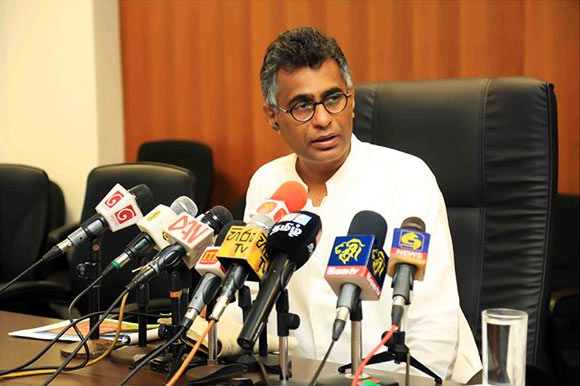 He was speaking at the maiden press conference of the ‘National Path-the Peoples’ Movement for the Development and the protection of the Nation’ at the Sri Lanka Foundation Institute in Colombo yesterday.

Ranawaka pointed out that some institutes that promote Islamic radicalisation are being operated in the guise of providing vocational training for the youth.

While asking the Government to probe whether foreign Islamic teachers presently in the country possess working visa or tourist visa, the minister said the Public Administration Ministry has already given those details to the Defence Ministry.

He emphasised that the Government should monitor as to how the Funds set up by various politicians get funds.

Observing that the Tri-Forces and Police have enough powers under the State of Emergency to curb the ISIS, Ranawaka said a political resolution to make it a success is the need of the hour.

Presenting the set of proposals by the ‘National Path People’s Movement’ to the Government for immediate implementation to ensure national security, he said that the National Security Council must be restructured and that the President, Prime Minister and the Opposition Leader must take part in its meetings.

“They must agree to a common set of policies at this juncture. There must be proper coordination among intelligence units. Anti-terrorist operations must be conducted aiming at Jihadists who have direct links to the ISIS numbering to about 200 in the country as at now. Those who aid and support these extremists must be neutralised by a de-radicalisation process. The Muslim community must actively support the Tri-Forces by providing the information they have. Nobody should take the law into their hands, and should support the Tri-Forces and Police to carry out their duties,” he said.

He said the Sri Lankan Muslim Community should reject the social alienation and radicalisation process promoted by Thowheed Jamaath and integrate with the rest of the people while retaining their Muslim identity.

Former Sri Lanka Rupavahini Corporation Chairman Ravi Jayawardena identifying the National Path People’s Movement as a non-political platform said it would launch its policy framework on May 12 at a public symposium at BMICH.

3 Responses to Patali calls for deportation of 800 Islamic teachers