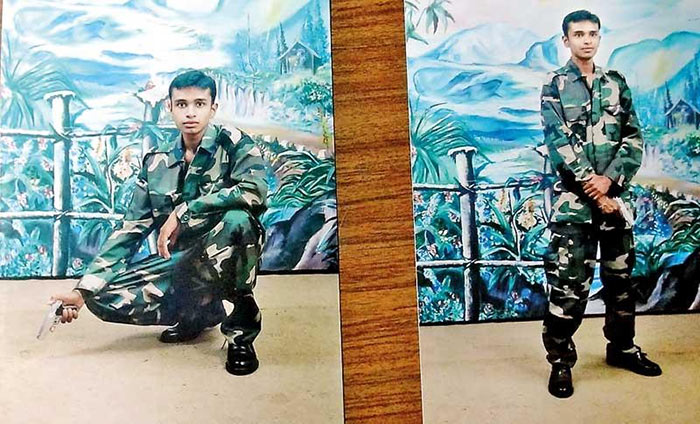 A 40-year-old man, who is alleged to have been in charge of the finances of the National Thawheed Jamaath (NTJ) organisation in the Central Province, was arrested by police in the early hours of yesterday in Gampola.

The suspect had been staying in a rented out house located in close proximity to the home of the owner of the shoe shop where the Haq brothers, identified as suicide bombers, had been hiding in.

The police had found two NICs, a photograph of the suspect dressed in Army fatigues, holding a pistol and also an audio containing a message by an ISIS woman cadre instructing their members to be on high alert after the Easter Sunday attacks and informing them that they would not be able to avoid working for the organisation.

Police also found bank slips of transactions carried out on behalf of the NTJ since 2017. There had been more than 200 transactions involving various persons providing financial assistance to the organisation. There were also receipts of bank deposits made to the credit of others.

A computer and mobile phones discovered at this hideout contained footage of the suicide bombings and news shown by various media outlets with regard to the Easter Sunday attacks.

It was noted that the footage on the computer was hidden behind pornographic scenes with a view of misleading anyone attempting to access the highly sensitive information hidden within.

However, a closer scrutiny of the contents revealed more details of the organization saved under various files.

Sources revealed that the Haq brothers, who were hiding in Anuradhapura after the bomb blasts on Easter Sunday had later arrived in Gampola and were given sanctuary on the second floor of their uncle’s shoe shop.

They had arrived in a van carrying a Sinhalese sign “Theruwan Saranai” and were in possession of NICs in the Sinhala Language.

From the information revealed so far, this shoe shop had been purchased by one of the suicide bombers, Shahid Abdul Haq, for Rs. 6.5 million.

The shop had shoes, bags and other items which are believed to have been purchased from the funds of the organisation for sale.

Police found discourses made by the chief suspect named Zaharan on several DVDs and pen drives.

The Gampola Police observed that a large amount of important documents of the organisation, including videos had been set on fire in a bid to get rid of evidence before the investigators arrived.