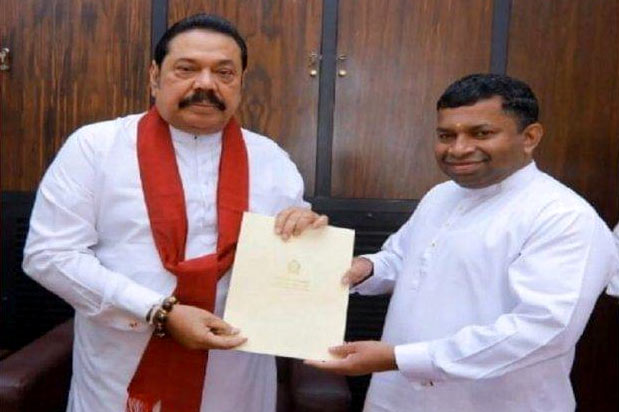 TMVP leader and MP, S. Chandrakanthan, has been appointed the Co-Chairman of the Batticaloa District Coordinating Committee in keeping with an understanding between his party and the SLPP.

Chandrakanthan aka Pillayan received his letter of appointment from Prime Minister Mahinda Rajapaksa in Parliament on Tuesday (22).

One-time deputy to Karuna Amman following the 2003 split in the LTTE, Chandrakanthan is remanded at the Batticaloa prison since 2015 over his alleged involvement in Dec 2005 assassination of TNA lawmaker Joseph Pararajasingham. Karuna, who formed the TMVP later quit the party he founded to receive a National List slot courtesy the UPFA in 2010??. The former LTTE Eastern Commander contested Digamadulla district from the SLPP at the last general election. He was unsuccessful.

Premier Rajapaksa handed over the letter of appointment dated Aug 10 issued by the Office of the President to Chandrakanthan while the Samagi Jana Balavegaya (SJB) clashed with the SLPP over the latter presenting the 20th Amendment to the Constitution in parliament.

The TMVP backed the SLPP at the 2019 presidential and 2020 general elections after the two parties reached an agreement in the run up to the last year’s poll.

Political sources told The Island that the TMVP had assured its support for the proposed 20th Amendment to the Constitution.

The TMVP is among nine political parties which won one seat each at the recently concluded general election.

The SLPP requires five more votes for the passage of the 20th Amendment.

Political sources said that in addition to the TMVP vote, the SLPP was sure of two more votes-one each from the National Congress (Digamadulla MP A.L.M. Athaullah) and the SLFP (Jaffna District MP Angajan Ramanathan).

Agriculture Minister Mahindananda Aluthgamage on Tuesday (22) claimed in parliament that 17 Samagi Jana Balavegaya lawmakers were engaged in secret negotiations to switch their allegiance to the SLPP. SJB leader Sajith Premadasa insisted in parliament that none of his members would do such a treacherous thing.