PM calls for close cooperation between governments and service organizations 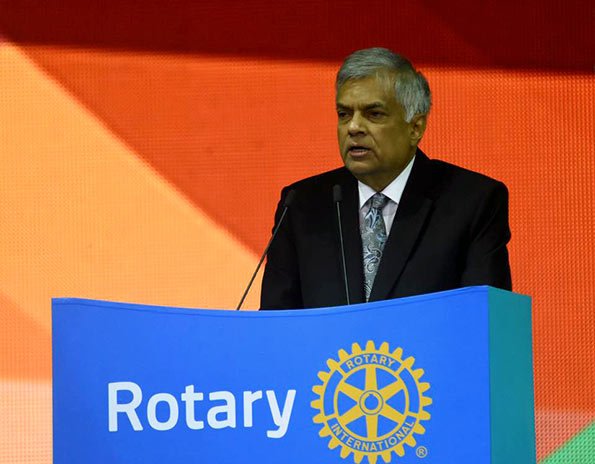 The Prime Minister delivering the opening remarks at the 107th Rotary International Convention in Seoul, South Korea on Sunday (May 29) explained that the monetary restraints, budgetary control and reducing the Budget Deficit do not mean that the Governments can abandon responsibility for some of its welfare services.

The Premier however cautioned that it is essential to avoid competition, overlapping and confusion between service organizations at a time when there is blending and blurring of sector distinctions.

The Prime Minister praising the Rotary organization for selecting a Sri Lankan K.R. Ravindran to head the organization this year, credited the Rotarians and the UNICEF for eradicating polio in Sri Lanka. He noted that In times the country has undergone conflicts and disasters Sri Lankan Rotary has been at the forefront in providing an enormous service to our people.

Thank you for inviting me here to Seoul, to help inaugurate the 2016 Rotary International Convention.

It is an honour to be here, and a great source of pride to us in Sri Lanka that you have chosen someone from our rather small country, to head your great organization this year.

We do not have polio in Sri Lanka. We have not had it now, for more than twenty years. We eradicated it at the height of an armed conflict and terrorism. And the fact that it happened as it did, was due in no small part to you here-to the work of Rotary, and the work of Rotarians at that time in Sri Lanka – inspired by none other than Rotarian President Ravindran.

Back in 1995 a few Rotarians together with the UNICEF got in touch with the Health Ministry. They wanted to do an NID, a national immunization day. Rotary pledged to bring in one and a half million dollars for it, and was looking for the balance from the government, in order to vaccinate the whole country against polio – in one shot.

The officials at the Ministry agreed that it was a good and tested idea; they thought that all children in the country should be vaccinated – except those in the conflict areas of the North and East as the government did not have access or control over those areas at that time.

But the Rotarians had insisted that this was not acceptable as this was Rotary money which could not be used to vaccinate only half the country.

Apparently the Ministry of Health officials had looked at these crazy Rotarians and said, “If you haven’t noticed, there’s a war going on. We don’t have control in the North and the East, so what is it you want us to do?”

Your Rotary President Ravindran had answered them saying, “Don’t worry about it. We’ll take care of the war.” In the end the Ministry of Health said, OK, go ahead, if you can stop the war, then we can vaccinate the whole country.

A couple of months later your President Ravi came back with a letter, delivered to his office and to the UNICEF office. It was a letter from the LTTE in the North saying, “You can have your ceasefire. We will lay down our weapons, if your Government will lay down yours, on the days designated as NIDays”.
A ceasefire came into being – they laid down their weapons. We laid down ours. And the Rotarians, UNICEF, Red Cross and other health workers went, with their white flags, on their jeeps, into the North and the East of the country where no one would have dared to go.

We called them Days of Tranquility. And they gave us a polio-free Sri Lanka.

And I think those Days of Tranquility, the experience of that NID, also gave us something else. They gave us hope that we in Sri Lanka, did indeed love our children, more than we feared each other.

This would not have been possible without Ravi. He played a key role in arranging a ceasefire to vaccinate the children in the conflict-affected area. Unlike others, he did not give up hope but plunged into the polio vaccination campaign with a wholeheartedness that only a few display.

In times the country has undergone conflicts and disasters Sri Lankan Rotary has been at the forefront in providing an enormous service to our people. During the tsunami in 2004 Rotary helped to rebuild 25 new schools and a maternity hospital in the aftermath. And I am aware that even in the face of the current crisis in Sri Lanka floods and landslides during the last few week Rotary has mobilized itself to help out.

We are glad to have Rotary in our country, for we have seen for ourselves that a community with Rotary, in fact, a country with Rotary, is better off, in every way, than one without.

A Rotary club as well as other such service organizations provides a country with something that every community, in every country – needs irrespective of its stage in development.

It provides a function that is complementary to government; by offering a way for people who want to make a difference in their community to do it for themselves, together, without having to run for office first.

And that does not for one moment absolve those of us who are in government of our responsibility. Perhaps the opposite it provides a greater impetus, for us to do our jobs better.

Your project to globally eradicate polio (only the second time in the history of earth, has this happened), has shown, not just to us in Sri Lanka, but to the world, that Rotary is a tremendously valuable resource to government, not only in developing nations, but in developed countries as well.

You are able to go places where Governments fear to tread, in a way that no one else can emulate. And I think that the governments of the world should begin to take advantage of this, by engaging more with Rotary as a partner, as well as with other service organisations to explore greater avenues for cooperation.

This is a necessity at a time when the roles of the Government and the roles of the service organisations are undergoing massive transformation.
The great financial crisis of 2008 has resulted in many Governments resorting to austerity as a means of reducing their budget deficits. Fiscal stress has led to cutbacks and uncertainty in Government spending- particularly in the social sector.

Some Governments have been trimming down the welfare state for decades – on the basis of their structural adjustment programs. In this background, service organisations have a larger role to play in mobilizing personnel and resources to fill the gap – created by government withdrawals.

Yet, monetary restraints, budgetary control and reducing the Budget Deficit do not mean that the Governments can abandon responsibility for some of its welfare services. It only means that we have to think of partnerships with service organisations or even contracting out services to service organisations as modes of service delivery perhaps as a far more effective mode of delivery. The Public Services too have to undergo transformation with great emphasis on delivery. This is a more cost effective method of the Government discharging its obligations to provide welfare services.

This new model will also require closer cooperation amongst service organisations as well as with government. However it is essential to avoid competition, overlapping and confusion between service organisations at a time when there is blending and blurring of sector distinctions. Governments could thus tap the specializations of service organizations while of course ensuring their autonomy, where necessary by law.

Another role that service organizations can play is to officially act as an oversight body on the function of a government establishment in their field of expertise. This is already happening in countries like India where for instance, a public trust is overseeing some of the programs of the Indian University Grants Commission. No doubt that this would mean that government establishments would need to pull up their socks – leading to greater efficiency and productivity.

Thus both government and in service organizations need to look within – at themselves – in times of change. Do we both have the capacity to be sensitive to – and to respond to – these external changes? One area that requires a lot of work is in the area of women’s representation both in government and in service organizations. Women need to be included not only as members and support groups but also as office bearers at local levels as well as in the highest echelons of governance. I am aware that a number of national Rotary Clubs have taken some initiatives to invite and encompass the entry of women into the workforce, to professions, to entrepreneurialism, and to corporate culture – during the last few decades. However, what is required is a policy decision at the highest ranks to ensure that women’s participation in Rotary is promoted at all levels of the organization.

Then there is also the expanding role of informal volunteerism arising from expanding mobile and internet/web connectivity and the host of social media platforms. The digital age has radically changed the way we communicate and interact with each other. Social media can both complement or replace face-to-face association. It has also extended the community beyond the neighborhood.

But at the same time, social media has its ills. No doubt you have already understood the degree of alienation from social realities in youth – given the diversity, richness and excitement of cyberspace realities; and no doubt you have already taken steps to target and recruit youth for your organizations. Because as noted earlier, I am sure you will agree with me that the success of a service organisation’s ability depends on its capacity to adapt to evolving changes in the global sphere – and to connect and be close and relevant to the younger generations. It is they who will sustain and drive the service organisation in the next few decades. This is why we have to ensure that the younger generations are at the centre in service organisations and no longer at the periphery.

We in Sri Lanka have been proud to lend you your President for this Rotary year. He has already made an extensive impact by pruning down the Rotary Board meetings from five days to three, driving down costs and giving recognition to merit. But we will be glad to get him back, when the Rotary year is over in June.

While looking forward to expanding our historic ties with the Rotary Club in the coming years as well as forging new partnerships to engage with the challenges of our times, I give you my best wishes for a very successful 107th International Convention