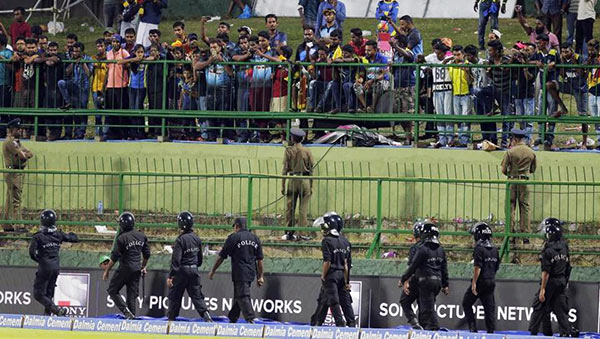 ICC Match Referee Andy Pycroft has reportedly sought security assurance from the Sri Lankan cricket board for the remainder of the limited-overs series against India following boorish fan behaviour during the third ODI in Pallekele on Sunday.

Irate fans, angered by the Sri Lankan cricket team’s continued poor performances, threw water bottles into the ground as India reached within eight runs of winning the match and sealing the five-match series.

Play was halted for over 30 minutes while riot police arrived and escorted fans in the grass banks. Both teams returned to finish the game.

A Sri Lanka Cricket spokesman said he had not received any specific information while adding: “He (Pycroft) may have generally spoken about it.”

A group of fans also blocked the Sri Lankan team bus following their nine-wicket defeat in the first ODI at Dambulla on August 20.

The next two ODIs and a one-off Twenty20 game will be played at the Premadasa Stadium in Colombo. The stadium had witnessed a fight between two groups of fans in 2015, during a one-day international between Sri Lanka and Pakistan.

ICC Match Referee Javagal Srinath had halted the game after a stone was hurled on to the field of play following a fight in the terraced area of the stadium while Sri Lanka batted.

While police stopped violent spectators inside the stadium, others were throwing stones from outside the venue. Play resumed and Pakistan went on to win the game.