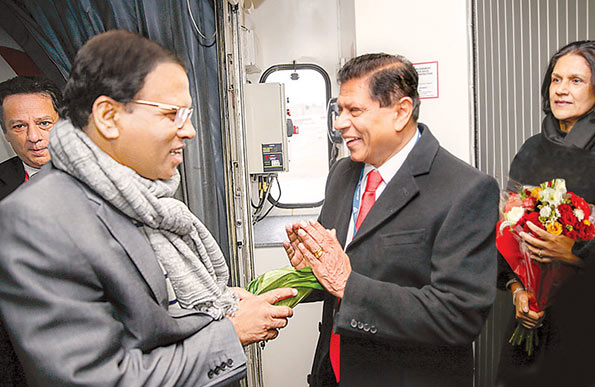 The summit is aimed at striking a long term deal to limit carbon emissions across the world in a bid to find a lasting solution to global climate change.

On the sidelines of the summit, the Sri Lankan President is expected to hold a bilateral discussion with the President of Serbia. The meeting is likely to take place on November 30.

On the same day, President Sirisena will attend a lunch hosted by the French President and Foreign Affairs Minister. President Srisiena will then address the UN global climate change summit representing Sri Lanka. The Sri Lankan President, during his two day visit to Paris, will also take part in the launching of the ‘International Solar Alliance’ jointly hosted by Indian Prime Minister Narendra Modi and French President Francoise Hollande.

Around 40,000 people are expected to participate in the event, which will take place until December 11.

French media says the gathering of 147 Heads of State and Government is set to be far bigger than the 115 or so who came to Copenhagen in 2009, the last time the world came close to agreeing a long term deal on climate change.

Political analysts dub this event as an ideal opportunity for the world to express solidarity with the French government and its people after the brutal terrorist attack earlier this month. A number of key world leaders, including US President Barak Obama and Chinese President Xi Jinping are set to attend the conference.

3 Responses to President arrives in Paris to attend COP 21