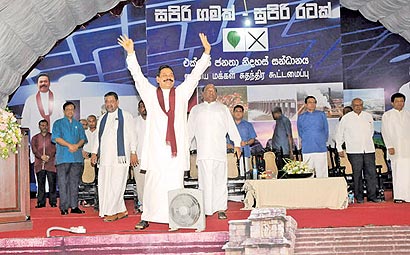 On the same note the President said that the UPFA had started all its victorious election campaigns from Anuradhapura after paying homage at the Sacred Sri Maha Bodhi and added that there was no doubt that the present one too would bring ‘victory to the villages’ would end with an overwhelming victory for the party.

Addressing, a large gathering President Rajapaksa noted that the Government’s intention in accordance with the Mahinda Chinthana – Future concept, was to establish resourceful, prosperous villages and thereby propel the country towards development and prosperity.

The President stressed that as the Government eradicated the term border villages from the Sri Lankan map it would also take steps to eradicate villages termed as under developed by bringing the fruits of development to all villages equally.

The President also noted that this was the only Government which brought forth before the people its policies via ‘Mahinda Chinthana’ when seeking their consent and also the one which had fulfilled those promises to the letter.

However there are elements who are trying to undermine these achievements by spreading false rumours. These are the ones who do not want the villages and the country to be developed to realize their selfish and ulterior political motives, the President said.

“They say that we are trying to sell State assets. But unlike them we are the ones who protected State assets and the country. Don’t be misled by these elements. Their tactics reveal their bankruptcy. “These elements cannot deter us. We have the courage and determination to overcome challenges as we have shown in the past. We are committed to uplift the living standards of the people and develop the country. We would make Sri Lanka the ‘Wonder of Asia’, the President said.

The President also promised the people of Anuradhapura who had suffered immensely due to recent floods and torrential rains that the Government would help to develop and restore all they had lost other than the lives.

“The damage was not confined to Sri Lanka alone. Many other countries too suffered the same fate due to changing weather patterns all over the world, he added.

On the same note the President pointed out that the tsunami had caused more damage to the country but Sri Lanka had managed to emerge from the devastation within a couple of years. Sri Lanka has the determination and the resources to emerge from the recent devastation as well, the President said and added that the Government would lend whatever help possible for the affected people to get back on their feet.

The President said that in this endeavour, the Government was planning to provide fertilizer, seeds etc. to farmers on subsidized rates in addition to providing other income earning avenues and necessary help to the affected.

“In addition, we have plans to renovate all damaged infrastructure including irrigation tanks,” he added.

President Rajapaksa also said there was a program to provide electricity to every household in the future and promised the people of Anuradhapura that no house in the district would be in darkness in the near future.

While identifying the Pradeshiya Sabha’s as a key component of village development the President said that the present Government had given more power to local bodies.

The results of this decision is quite evident at village level as they are on the path to rapid development under the guidance of their own local expertise,” he observed.

He also advised the contesting candidates to work as a team to propel the UPFA to victory. He also told them to uphold discipline and democracy during their campaign trail.

The President noted that they should keep in mind that other parties too should be allowed to engage in campaigning freely.

The UPFA has decided to hold district summits instead of mass rallies under the patronage of the President in all the districts in support of their candidates contesting the forthcoming polls slated to take place on March 17. Yesterday’s meeting was also addressed by Prime Minister D M Jayaratne, Chief Ministers Berty Premalal Dissanayake and Sarath Ekanayake. Minister Tissa Karalliyadda, Maithripala Sirisena, Susil Premajayantha, and Tissa Vitarana. A number of other Ministers, Government politicians, contesting UPFA candidates and general public attended the meeting.