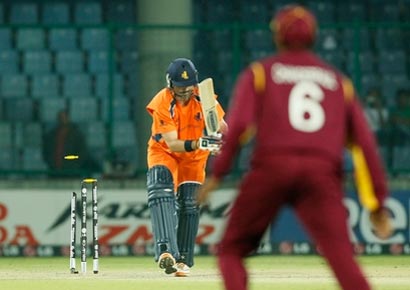 Paceman Kemar Roach took a stunning hat-trick as West Indies thrashed the Netherlands by 215 runs in their World Cup Group B clash in Delhi. Roach became only the sixth bowler to take a World Cup hat-trick as he finished with outstanding figures of six for 27 and gave his side an emphatic victory at the Feroz Shah Kotla stadium.

Netherlands skipper Peter Borren won the toss and elected to field, leaving Chris Gayle to score 80 and Kieron Pollard a belligerent 27-ball 60 as West Indies post 330 from their 50 overs.

Borren’s side never looked remotely likely to challenge as the Associate nation were swiftly reduced to five for 36 inside 10 overs, and they never recovered with their resistance extinguished after just 31.3 overs courtesy of Roach’s brilliance, Yahoo sport reports.