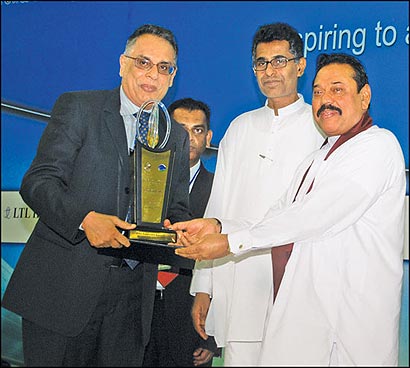 He said the Government has paid special focus on the environment friendly power generation sector which could bring more benefits to the consumers. President Rajapaksa was speaking at the energy efficiency awards ceremony organized by the Sustainable Energy Development Authority and the Power and Energy Ministry at the BMICH yesterday.

Jet wing Beach Hotel in Negombo received the gold award for the most energy efficient institution in the hotel sector while SriLankan Catering bagged the Gold award for state sector building category.

The Overseas Reality Plc which owns the World Trade Centre received the gold award for the usage of energy efficient methods in the large scale commercial sector building category.

The President added that the Government succeeded in providing electricity to more than 85 percent of households in the country.

President Rajapaksa said the Iranian Government has funded a comprehensive rural electrification project in the country and the Government can achieve the target of providing electricity to all house holds in the country soon.

He stressed that the country had to suffer due to the failure of previous Governments to take right decisions at right time for energy sector development.

The Norochcholai power plant and upper Kotmale hydropower generation project could have been started two three decades earlier. But the previous governments did not take any decisions over them due to various reasons.

He added that the Government led by him commenced the construction of Norochcholai coal power plant after a lapse of 30 years to solve the energy crisis in the country.