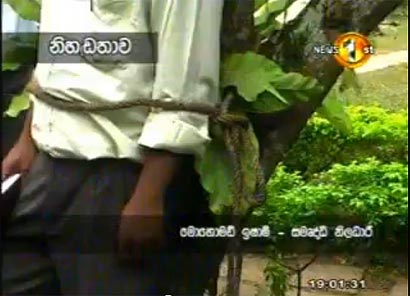 An open letter to His Excellency President Mahinda Rajapaksha by Dr. Edward Perera, The Chairman of Hela Abhimana Foundation in Germany.

How dares he to perform acrobatic feats, where the wise avert to intrude on

Let me draw your kind attention to a particular conduct of Minister Mervin Silva in a meeting with Samurdhi officers yesterday. An officer who could not attend the meeting organized by this minister was punished in a most primitive way and this kind of inappropriate behaviour of a deputy minister could bring only disgrace to the country.

Mervin Silva was speaking about “discipline” (Vinaya) even in this particular incident, even though he never showed it in his life and that is why his son Malake too followed him.

We both haven’t forgotten how some anti-SLFP elements tried to attack you personally, when you visited the Vidyodaya campus as a member of parliament in 1972. Mervin provoked the angry crowed and I was one of your friends who protected you from this sudden attack. We couldn’t help Mervin as he was foolishly after these gangsters and finally got head injuries. We sent him to Colombo South Hospital in Prof. Epasinghe’s blue colour Jeep for treatment.

Even after that incident, he had no discipline in his conduct and he continuously put you in embarrassing situations on several occasions.

During the Presidential Elections in 2005, I closely worked with your two younger brothers namely Gotabaya and Basil to support you. Your brother Basil Rajapakse promised me over the phone that he would keep Mervin Silva away from public meetings as his speeches at public meetings could bring only a disaster to your campaign. Since then, Mervin Silva has done an immense damage to the party and to you personally.

People have already started gossiping about your tolerance with regard to this minister’s continuous improper behaviour. It is really bad for your reputation and it should be stopped immediately. As the President of Sri Lanka, you have set a great example by defeating World’s deadliest terrorist movement and with your admirable efforts to bring peace and prosperity to the country through reconciliation and mutual understanding.

As you know, I have been a close friend and an ardent supporter to you in your political career from the very beginning from1970. I have done my duty to protect Sri Lanka from the terrorist menace and to safeguard the image of the country to my best during last three decades without expecting any personal gain and I still do so continuously and unconditionally.

I make this kind request to you as a reliable and close friend that you should not allow any politician to overrule your presidential authority. I admire very much your “down to earth” quality, although you are the most powerful person and respected person in Sri Lanka. Why cannot other politicians take you as an example and follow your non-violent path?

Please reinstall freedom of expression and democratic rights of people in Sri Lanka. There is no other substitute authority other than you to exercise the power and to clear the path. Please do not disappoint the hearts of millions living in Sri Lanka, who perceive you as a symbol of national integrity and pride.

If Mervin Silva is incapable of finding his limits, please be kind enough to show him that you are the only President in Sri Lanka.

10 Responses to Mervin Factor – An open letter to President Rajapaksa