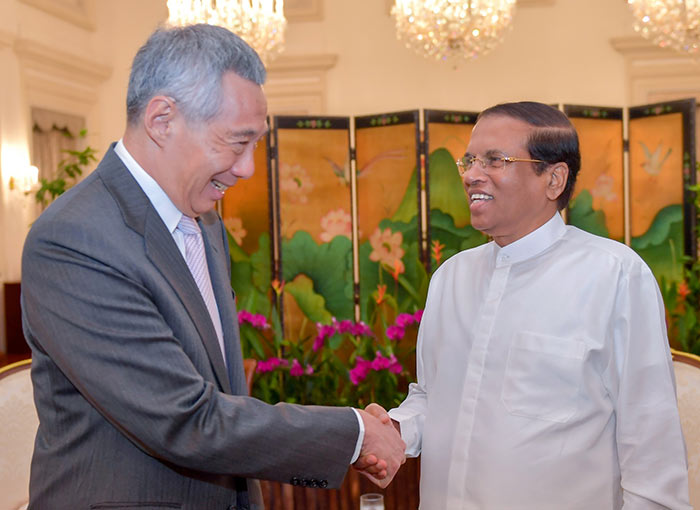 The two leaders agreed to further strengthen trade, tourism, and industrial relations between the two countries during this meeting.

President Sirisena, referred to the Free Trade Agreement signed between Singapore and Sri Lanka said that while drafting it certain weaknesses were evident from the Sri Lankan side and it is expected to make certain amendments. President Sirisena emphasized the importance of working towards that in the future.

The threat of drugs which is a main challenge not only to Sri Lanka but also to the entire region and Singapore Prime Minister referring to the steps taken under the leadership of President Sirisena against drug trafficking in Sri Lanka and extended the fullest support of the Government of Singapore to the drug eradication programmes.

A number of Sri Lankans are engaged in different professions in various fields in Singapore and the President was thankful for the Prime Minister of Singapore for the support given by his Government for the Sri Lankans who are employed in that country and the welfare of the Sri Lankan students engaged in higher education.

Meanwhile the Minister of Environment of Estonia and the fourth chairmen of United Nations Environmental Summit Slim Kiisler met the President and held discussions.

The Minister appreciated the program of the Sri Lankan government through the guidance of President Sirisena to ensure sustainable development of the country by preserving the environment.

President Sirisena has set a model to the world on environmental conservation. He was grateful for the suggestions made by the President Sirisena at the Forum today. Expressing his gratitude, Minister said that the proposals would be of internationally significance.

In addition, he was also invited by the President to attend the United Nations Environment Program in Nairobi next March.

Attention was drawn to developing existing bilateral ties between Estonia and Sri Lanka in new fields.

2 Responses to President holds discussions with Prime Minister of Singapore