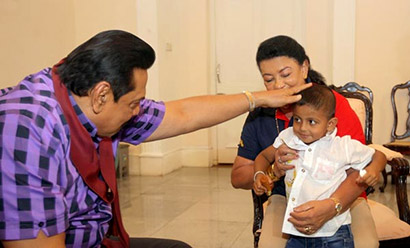 President Mahinda Rajapaksa yesterday had lunch with Danindu Yashen, who was rescued from his kidnappers on Friday and his family at the President’s House.

Danindu was also provided with toys by the President.

The CID has been provided with detention orders to interrogate the four suspected kidnappers arrested on Friday night.

Detectives are also trying to find out whether they were involved in similar crimes in the past.

2 Responses to President hosts rescued child, his family for lunch