SRI LANKA asks: Is the ITAK Constitution Federal or Confederal? 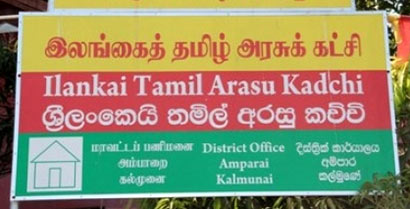 With the conclusive end to LTTE terror another obstacle has emerged. Shrouded in secrecy and hidden by verbal statements, there is an underlying need to make clear and establish what the ITAK Constitution is aiming to achieve. Though ITAK is using the English term ‘Federal’ what the general public and the Sri Lankan Government need to direct attention to is the 2008 amended Constitution of the ITAK – Illankai Tamil Arasu Katchchi. While implying it is for a federal solution, is the ITAK aiming for a confederal solution which is what ITAK’s amended constitution relates to. To put these misconceptions to rest, it is best that ITAK makes its position clear in a legal and binding way before any talks of solutions in the future.

Dismembering nations has become the norm for the neocolonial West.

Self-determination originally used as a concept during decolonization has today become a political tool to carve out territories that are strategically and resource-rich revenue for Western politicians backed by global MNCs. Thus, creation of Kosovo, South Sudan and likely Kurdish self-determination are just a handful of examples.

Illangai Thamil Arasu Katchi or ITAK as it is known was formed in 1949 the year after Ceylon gained independence. The meaning of ITAK in Tamil (a separate Tamil state) was shrewdly masked under the English name Federal Party. Deceit has been the foundation behind its name and meaning since. The formation of ITAK in 1949 should make people wonder under what ‘grievance’ was there a need to establish a party aiming to form a separate Tamil state when since 1815 the British were governing Ceylon.

If the ITAK has ascribed for itself the English name Federal Party, is it just a name or does the ITAK conform to Federal ideology?

If a political party or association has as one of its aims and objectives the goal of establishing a separate state in Sri Lanka isn’t there a provision in the Constitution of Sri Lanka to bring them before the Supreme Court? YES. There is the 6th amendment.

However, the issue is that 6th amendment cannot be applicable for a party aiming for a federal solution though it can well be applied to a party aiming for a confederal solution. This is why it is extremely important to divert everyone’s attention to the ITAK constitution. The TNA is just an unregistered umbrella for numerous Tamil parties. It is the ITAK constitution that must get everyone’s attention.

In August 2008, months before the LTTE was conclusively eliminated the ITAK leadership amended its Constitution and substituted the word “Shamasthi” with “Innaipatchchi”.

If “Shamasthi” stood for ‘federalism’ why was there a need to substitute another word “Innaipatchchi”?

Could it be that while “Shamasthi” stood for federalism, the newly inserted “Innaipatchchi” is meant to imply that the ITAK is vying to create a Confederate?

If the motive is to create a confederation, does that not make ITAK attempting to create a separate state?

Many will now wonder (or should wonder) what a confederacy is.

A confederacy is a union of independent and sovereign States.

A confederacy is formed with an intention to create independent and sovereign States.

There is an obvious clash with the 2 terminologies primarily because the majority people desire to ensure that Sri Lanka maintains its unitary status. Thus, even Federalism is viewed as being at conflict with the unitary status of Sri Lanka. ITAK’s leaders often refer to a solution within a unitary Sri Lanka. These are however only verbal exclamations and have nothing to do with the ITAK constitution amendment in 2008.

The question we want answered is – Is the ITAK Constitution amendment of 2008 espousing a confederate set up?

What is crucial to the amendment made by ITAK is that while there is no legal provision under Sri Lanka’s 6th amendment to take legal action, the possibility is open if ITAK is vying for a confederal solution.

The most valid reason to object for a federal set up is the simple argument that Sri Lanka is just a small country while the federal system of government is required for countries as large as the US and India. Both countries have kept key rights within their realm and have the power to at any given time take over the State.

The next alarming factor is that the government of a confederation can withdraw from the Union.

Is it also possible that ITAK is building its argument towards their ultimate goal:

First amending ITAK constitution and substituting the original word used to mean ‘federal’ – Shamasthi with confederal word “innaipatchchi” and simultaneously referring to Tamil “homeland” and quest for ‘self-determination” but claiming to desire to live in a “united Sri Lanka” looks to be an obvious quest towards separation. The problematic issue here is that Tamils or ITAK have no means to show an exclusively held Tamil homeland which Sinhalese have not been living in. Sufficient archaeological and historical proof establishes the fact that Sinhalese had been very much living in the very areas that the claims to a Tamil homeland are being made.

Given the meaning of confederation with the province/state Government offering rights to the people in the province/State and not the Central Government, we can next connect that with the ITAK constitution which claims to guarantee various rights (right to religion, language, culture etc).

Reiterated again the rights given to the people in a confederacy is by the Government of the Province/State and not the Central Government. This is why it is important that the Sri Lankan Government and the general public should know exactly what the ITAK aims for vis a vis its Constitution. Verbal statements cannot be accepted as the position of the ITAK. The Constitutional provision of the ITAK is what is legally binding and showcases what the ITAK’s real intentions are. ITAK says it is guaranteeing religious and language rights but under a federal solution (which ITAK claims it wants) such rights cannot be given by the federal state government. Only the Central Government can provide fundamental rights. However, in a confederal set up the State

Government has the ability to guarantee rights and this is where ITAK constitution keeps us in suspense.

The reason to demand ITAK make clear its intentions is all the more pressing given other clauses in its amended Constitution which says that the ITAK once creating a ‘homeland for Tamils’ would co-exist and collaborate with the Sinhala provinces. There are no Sinhala, Tamil or Muslim provinces in Sri Lanka. The people are living all over the island. The Tamils have chased out the Sinhalese and Muslims from the North but that cannot erase the fact that Sinhalese were not living in the North. As such if Tamils claim to have a right to the North, the Sinhalese have every right to stake claim to the North as well.

It is important that the ITAK be made to respond and to make official their stand because the amended Constitution is referring to words that are part of a confederal set up and these could not have been coincidental.

Refer the confederal constitutions of the US when it experimented with the confederacy – here to co-existence and collaboration were words used. Coexistence and Collaboration may be two harmless and innocent meaning words but the essence of the issue is that in a confederacy the members of the union may suddenly decide they do not wish to live in co-existence or collaboration and when that happens the nightmare that we envisaged ITAK is dreaming of would happen – separation. A confederation falls apart when there is no co-existence or collaboration and when we know the intent is obviously to ensure there is neither we need to ensure ITAK is made to clarify its position in a binding form. The general reference to a ‘UNITED Sri Lanka’ places itself well within the coexistence/collaboration framework of a confederation. The ‘united’ becomes synonymous with the coexistence & collaboration and when one counts the people lining up nowadays to defend and promote a ‘UNITED SRI LANKA’ proposition, the patriots of Sri Lanka as well as the GOSL must immediately realize that these gestures are all pushing towards a confederal solution which would enable the North to secede by pushing the self-determination, Tamil Homeland and inability to coexist or collaborate scenario.

The Sri Lankan Government and its legal advisors cannot be naïve enough not to look at the arrangement that ITAK is espousing and the language being used. These are not consistent with a federal solution at all.

ITAK needs to make very clear in writing and with legal binding that it is not espousing a confederal solution which is a stepping stone towards unilateral secession.