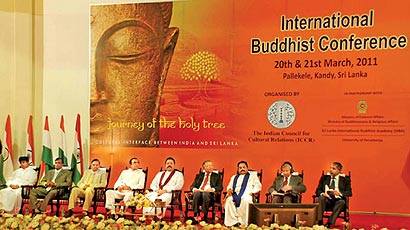 Scholars and delegates from eight countries participated in the conference organized in commemoration of the 2600th Sambuddha Jayanthi.

The conference is a joint effort by Sri Lanka and India.

The conference is an outcome of bilateral talks between President Mahinda Rajapaksa and Indian leaders during a visit to New Delhi last year.

This conference is a part of a series of joint celebrations by Sri Lanka and India to mark the 2600th anniversary of the attainment of Enlightenment of the Buddha.

The organizers yesterday identified the Conference as one which would further nurture the mutual bond of friendship between India and Sri Lanka.

The conference was organized by the Indian Council for Cultural Relations (ICCR), in association with the External Affairs Ministry, Buddhasasana and Religious Affairs Ministry, the SIBA and Peradeniya University. The two-day conference will be addressed by 18 eminent scholars from Sri Lanka, India, Indonesia, Myanmar, Thailand, Cambodia, Nepal and Vietnam.