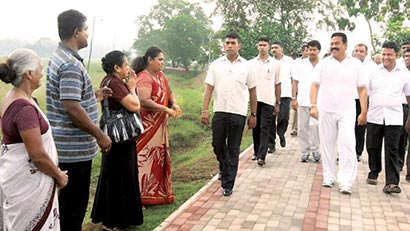 President Mahinda Rajapaksa inspected the public jogging track opened near the Black Bridge (Kalu Palama) on Gampaha-Orutota road during a surprise visit yesterday morning and used it for his own morning constitutional.

The four kilometre jogging track has been laid on a picturesque plot of land on either side of the Oruwal Oya for the benefit of the public as part of a giant development programme launched in the Gampaha district, said a press release by the President’s Media Division yesterday. Nearly 1,500 new plant species have been planted beside the track to protect and conserve vegetation.

The construction work on the track costing Rs. 32 million was undertaken utilizing the latest technology under the Mahinda Chinthana policy of bequeathing a healthy person to society, it has been planned to build jogging tracks throughout the country.

Two such tracks have been built in the Gampaha district so far at Orutota and Mahara.

After doing his exercises President Rajapaksa also interacted with the people present at the venue.