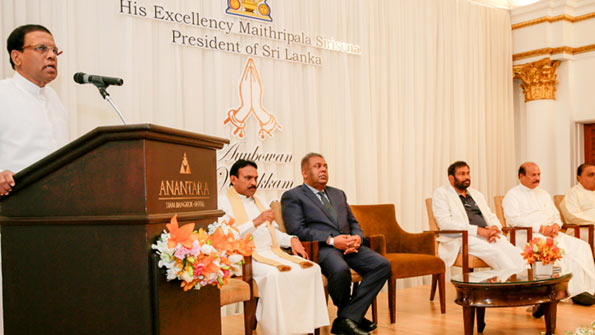 President Maithripala Sirisena invited Sri Lankan intellectuals living in Thailand to return to Sri Lanka to provide their service to Motherland as freedom and democracy established in the country.

The President has extended this invitation during a meeting with  the Sri Lankan community in Thailand, President Sirisena commenced a four-day state visit to Thailand on the invitation of the Prime Minister of Thailand General Prayut Chan –o- cha to participate in a ceremony to mark the 60th anniversary of diplomatic relationship between Sri Lanka and Thailand .

Entrepreneurs, members of the Trade Association and university students participated in this meeting organized by the Sri Lanka embassy in Thailand.

Addressing the gathering the President said that the opportunity to work freely and independently in all the fields have been widen in Sri Lanka in a background where rights of the people conferred by the constitution are secured and independent commissions were established.

“The time has come for everyone to act without fear and mistrust in the country,” the President added.

The accelerate development achieved by the Thailand is exemplary to the other countries in the world, the President said.

The students requested the President to provide more technology facilities in rural areas to utilize their knowledge acquired in Thailand.

The Sri Lankan community in Thailand apprised the President regarding the importance of further strengthening of air links between the two countries.