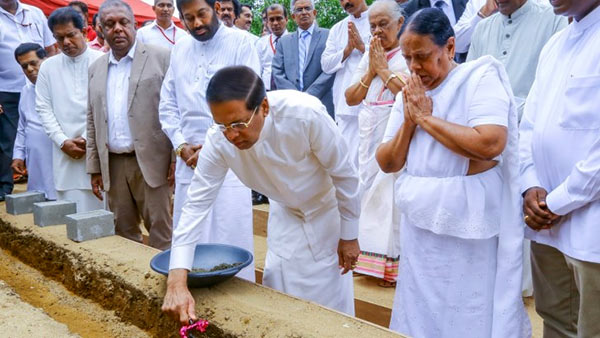 The foundation stone laying ceremony of the ‘Pandith Amaradeva Sangeetha Asapuwa’ was held under the patronage of President Maithripala Sirisena at the premises of the Ape Gama, yesterday (28).

The Pandith Amaradeva Sangeetha Asapuwa, which is to be built around 120 perches land under the Urban Development Authority near the Ape Gama in Bathtaramulla, will be comprised of a library, an archive, a museum and a preservation centre. The Sangeetha Asapuwa is estimated to cost Rs.250 million.

It is significant that the President has extended an invitation to Visharada Nanda Malini to join him at the unveiling of this event.

The President also unveiled the plaque of the ‘Pandith Amaradeva Sangeetha Asapuwa’.

Mr. Ranjan Amaradeva welcomed the guests who arrived for this event.

Pandith Amaradewa won the Ramon Magsaysay Award which is considered as the Nobel Prize in Asia. Mrs. Vimala Amaradewa handed over that award to the President at this occasion. The President handed over that award and the certificates to the Director of Department of National Museums, Sanuja Kasthuriarachchi for preservation, in the presence of Minister of Cultural Affairs S. B. Nawinna.