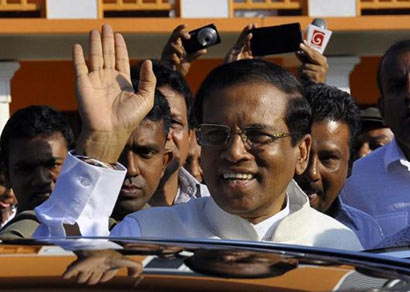 Maithripala Sirisena’s surprise election as Sri Lankan President on January 8 has paved the way for a significant departure from the policies of his predecessor, Mahinda Rajapaksa. In acknowledgement of the support of members of disaffected minority groups, including Tamils in the north, Sirisena has undertaken to write down farmers’ debt, increase the health and education budget, and fight corruption.

Fifty or so political appointees to Sri Lankan diplomat posts have been recalled, including the High Commissioner to Australia, Admiral Thisara Samarasinghe. And this month, the new government blocked a bid by James Packer to build a casino in the heart of Colombo, which had been approved by the old regime, with millions of dollars in tax breaks for Packer’s company, Crown Resorts.

The election result should drive a fundamental rethink by Australia towards its future relationship with Sri Lanka. Before the election, it was predicated solely on the basis of stopping Tamil asylum seekers coming to Australia by boat. It was foreign policy at its worst; a crude and undignified domestic power play that was never likely to be embraced by the new President.

Prime Minister Tony Abbott, illustrating again his inability to learn from his mistakes, rang to welcome the result and then proceeded to reiterate that stopping boats would be front and centre of the relationship; it was inappropriate and inept. Last year, Australia handed over two patrol boats and acquiesced to demands for funding to assist Sri Lankan authorities stop the boats.
Advertisement

It would be embarrassing were Australia to be caught in the foreshadowed inquiries into corruption alleged to have occurred on Rajapaksa’s watch. It was poor judgment and ill-conceived self-interest that drove Australia’s relations with such a rotten and discredited regime.

As Foreign Minister, Julie Bishop did better, a lot better. She pledged Australian support for the new President in his moves to implement democratic reform and counter corruption. It has left her room to argue the case for ending the oppressive military occupation of Tamil areas in the north, which has done so much to force Tamils to flee the country on boats. It is this, and not turning back boats by force, that will see an end of the need for Tamils to flee state-sponsored persecution.

Arguing the case has urgency because Sirisena has so far maintained the policy of his predecessor of prosecuting Tamil asylum seekers intercepted on the high seas by Australia and illegally returned to Sri Lanka. The latest transgression occurred in mid-February.

As Bishop has indicated, it is in Australia’s interests to foster and support Sri Lanka as it moves to implement democratic reform. Australia has the capacity and influence to do it. Not only will that play into our domestic agenda of obviating the need for Tamils to leave, but also enable closer dialogue and co-operation among Australia, Sri Lanka and India on balancing Chinese ambitions in the Indian Ocean. On the strength of considerable financial inducements, the Rajapaksa regime allowed undue Chinese influence over government and a growing presence within the country. Sirisena cites this as a major factor in inducing him to stand for the presidency.

Sirisena has ruled out an international investigation into the massacre of Tamil civilians at the end of the civil war in 2009 and opted instead for a domestic inquiry. Once she has put the relationship on firm footing, Bishop might lobby for a United Nations-sponsored investigation.

At the request of the Rajapaksa regime, more than 50 Tamils are detained in Australia as a “threat to security”, even though they have been found to be refugees. Their incarceration, which would otherwise be illegal, is made possible by deploying secret provisions of the ASIO Act. The Australian government agreed to keep them in indefinite detention as part of a deal to stop the boats. They should be immediately released. They have done nothing wrong; they were hostages to the Rajapaksa regime’s paranoia.

An opportunity has been created for Bishop to undertake important regional diplomacy; it should be grasped and used productively.