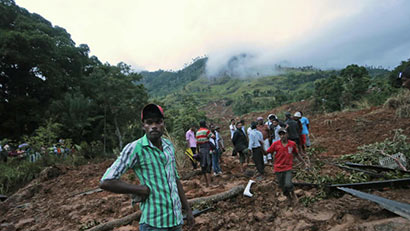 Floods and landslides linked to climate change have battered parts of Sri Lanka in the past two years, disrupting food output, but scientists believe a new program to install low-cost weather stations based on open-source technology could help farmers adapt to increasingly wild weather.

New Mobile Weather Stations, made mainly from local parts, are starting to give farmers quick access to rainfall data, so they can better plan for floods or other extreme weather, Yann Chemin, a scientist leading the new initiative, said on Tuesday.

The easy-to-make sensors cost about $250 to produce compared with about $10,000 for standard weather stations, he said.

When more of the systems have been produced, Chemin hopes to have text messages sent from the sensors directly to farmers and government officials when rainfall levels are expected to rise in a specific area.

When farmers get the information, they will have roughly six hours to empty irrigation tanks, or make other adjustments in their fields to prevent crop losses from floods, he said.

“This isn’t rocket science, but it does give people time to react so they can save lives and crops,” Chemin told the Thomson Reuters Foundation.

In some parts of north central Sri Lanka, 65 percent of crops have been destroyed in the past two years due to floods and other disasters linked to climate change, he said.

The information will also allow rural households to get ready to collect rain water for drinking.

Several dozen Sri Lankans, including rural blacksmiths and electricians, along with urban electronic designers, have been hired to produce the weather stations, Chemin said, creating jobs while helping communities cope with climate change.